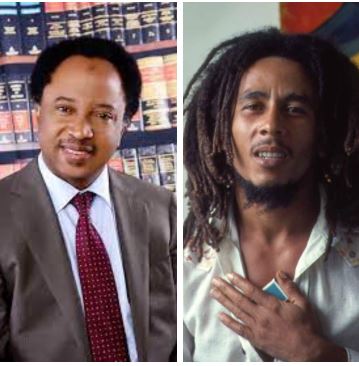 Politician and human rights activist, Senator Shehu Sani and a number of Nigerians from all walks of life on Tuesday paid tributes to the legendary reggae music icon, Robert Nesta Marley, fondly christened Bob Marley  40 years after his demise.

The late Jamaican singer is considered as one of the pioneers of reggae.

His musical career was marked by a fusion of reggae, ska and rock as well as his distinctive vocal and songwriting style.

Reacting to the news of his 40th anniversary, Senator Shehu Sani noted that Marley would always be remembered for his artistic contribution to d liberation of Africa.

“Today marks 40 years since the death of Bob Marley. He would always be remembered for his artistic contribution to d liberation of Africa. His music is timeless & his words are prophetic & inspirational. He was a symbol of struggle for justice & a pride to the black race. #BobMarley,” he said.

A Nigerian motivational speaker, Samuel Odaba stated that he was not opportune to know him, he listens a lot to his music album.

“But I grew up to know a true definition of a prophet who do not need to go stand on the altar preaching, but rather prefer the studio to do the work more and pass information to the world #BobMarley.”

A poet, Ben Fortune Akinyemi also described him as a unifying factor.

“I enjoyed his music whilst growing up. He was indeed a uniting factor. He emphasized love for humanity, affection for fellow men. He was indeed a legend. May his soul continue to rest in peace!”

Alademehin Oluwaseun, a biochemist stated that the reggae star has shown what exemplary lifestyle should be like.

“Rest well legendary Bob. What will you be remember for? I want to be remembered for the lives I touched while am alive,” he said.

A businessman, olaonipekun olumide remarked that ‘Jah Rastafari’ like Marley are rare and probably turn up once in a thousand years.

A fiery activist, @Emperor_Hencho, however expressed a contrary view when he emphasised categorically that the reggae icon would have been eliminated long before his death for daring to speak truth to power.

“If he was a Nigerian, ya all would have killed him or assassinated for the promotion of the herb and the words he speaks of truth and liberation from oppression. May Jah guild his soul,” he said.

Robert Nesta Marley AKA Bob Marley was born in 1945 to a white middle class father and a black mother, in Jamaica.

His childhood was spent in poverty as he had little contact with his father, a naval officer who worked for the British government.

Marley eventually left home at age 14 to pursue a music career in Kingston.

In 1972, he made it to Britain with his band The Wailers to tour with Johnny Nash in the hope of launching his international career.

The following year, The Wailers released their album Catch a Fire and made their television debut on the BBC.

The album had a big impression and gave them a wider audience outside of their traditional fan base.

After another tour in 1975, a recording of No Woman No Cry live at The Lyceum, London, was released as a single and gave Marley his first UK hit.

MORE READING!  Why I auditioned for BBNaija despite being famous - Boma

He was known for his Rastafarian faith, along with his wife, Rita, with the religion reflected in his music.

A passionate lover of the round leather game, the reggae star was known to kick football in between studio sessions or before he went on stage.

He once opened up in an interview in 1980, “I love music before I love football. Playing football and singing is dangerous because the football gets very violent. I sing about peace, love and all of that stuff, and something might happen y’know.

“If a man tackle you hard it bring feelings of war,” he said.

His last memorable live performance in the UK was on 13 July 1980 at New Bingley Hall, Stafford.

Marley died the following year as a result of acral lentiginous melanoma, which he had been diagnosed with in 1977.

The legend was buried in his Jamaican birthplace of the village Nine Mile.