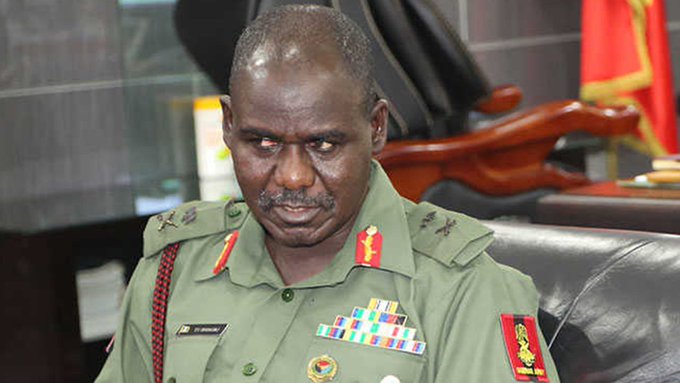 Former Chief of Army Staff Lt. Gen. Yusuf Tukur Buratai, may be out of office but his name will not fly away from the memories of Nigerians that fast with many calling for his probe on Twitter.

Recall that Buratai alongside the three other service chiefs were replaced by the President, Major General Muhammadu Buhari (retd.) on Tuesday, the presidents first move on the position since 2015 and he has received a widespread commendation.

However, within hours of officially becoming Nigeria’s longest-serving ex-Chief of Army Staff after spending 66 months in the position, Nigerians have taken to Twitter to troll Buratai and at the same time called on the president and the International Criminal Court, ICC, to probe him.

You might have forgotten but Nigeria’s insecurity heightened under Buratai’s watch including the October 20, 2020Lekki shootings as well as yesterday Orlu community clash involving the Nigerian soldiers and operatives of the Indigenous People of Biafra known as the Eastern Security Network – ESN.

Furthermore, Nigerians are holding Buratai responsible for his inability to curtail the insecurity in the country including the killings and kidnappings resulting from unchecked acts of the Boko Haram terrorists and the infamous Fulani herdsmen.

Reacting after the replacement of Buratai, the opposition party, the Peoples Democratic Party (PDP) have urged Buhari to probe him.

Also joining the train alongside many Nigerians are former Governor of Ekiti State, Ayodele Fayose, and former presidential aide, Reno Omokri, who once called for a no-holds-barred fight with the ex-Chief of Army Staff.

Buratai, your sack is not the end. You and #Buhari must be tried by the @IntlCrimCourt. We have documentary evidence ready and waiting. Both of you will never have peace and happiness in your sorry lives for what you did at #LekkiMassacre. And when you die, you‘ll also face God!

It is my call to the ICC and other relevant authorities that tenure of the “sacked” Service Chiefs should be investigated, most importantly human rights abuses and extra judicial killings under their watch and commands.

Now that Buratai is retired, will he be made to answer for the massacres he oversaw? The Shi’ites? Lekki Toll? Oyigbo?

Hello Buratai, now that you are out of job, who ordered Lekki Toll Gate shootings? pic.twitter.com/vvFk8jrR5t

The transiency of power has hit up on Buratai. The massacres, killings, demotivated soldiers, etc. are things he will be remembered for.

I am just hearing that myself and Buratai are now both bloody civilians?. So after all that gra gra he leaves the office to be remembered for brutally killing Nigerian youth who simply cried out to be allowed to live!
What a shameful way to be remembered!

It is a good time for Buratai to answer for all his extrajudicial killings in. Nigeria.

Nothing last forever, Buratai is now a civilian.

Farewell to the Great Buratai
He huffed but Shekau didn’t die
His days now of cakes
From venomous snakes
And income from sheikhs in Dubai pic.twitter.com/mVqXyBwOKX

This administration has done too much damage for me to be excited about this service chiefs, there should be documented investigation and accountability of the activities of buratai and others concerning insecurity and lives lost

General Buratai, the chief of army staff, who ordered the killing of defenseless Nigerian youths protesting #EndSARS on the 20th of October 2020 while waving the national flag has just been sacked.

Please invite him in earnest to begin his trial. Thank you!

now that chief of army staff Buratai has been sacked, am i the only one who still wants the Reno Omokiri fight to happen ?

Lagos judicial panel on #EndSARS can now invite Buratai. Buratai petition to ICC in progress too.

VIDEO: If you fall under anointing and break anything you will pay, pastor warns church members