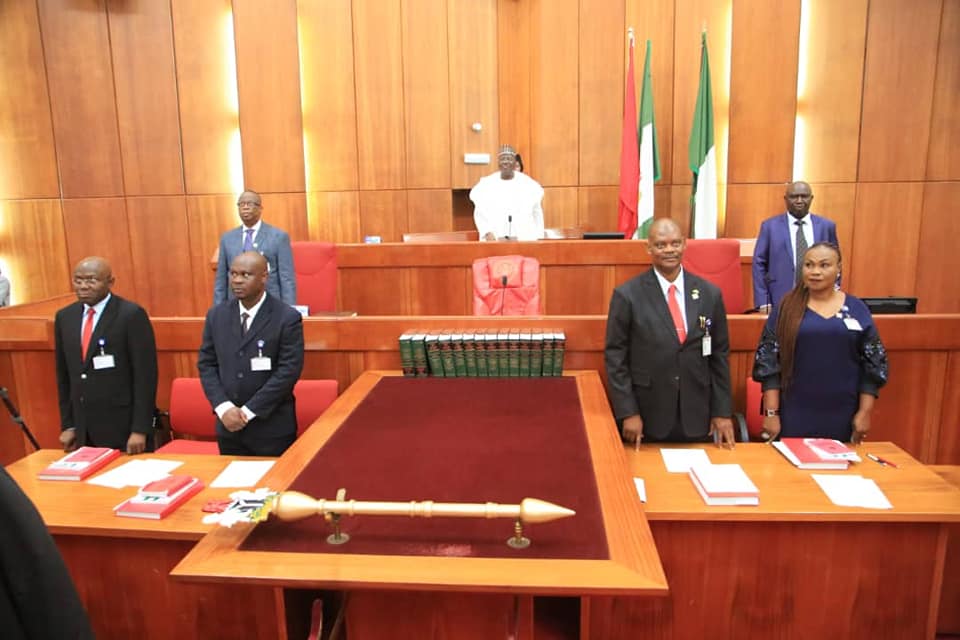 Olalekan was rejected for being a card-carrying member of the All Progressives Congress (APC), based on the recommendation of the committee.

The confirmation followed the consideration of the Senator Kabiru Gaya-led Senate Committee on INEC by the Senate.

President Muhammadu Buhari wrote to the Senate on October 29, seeking the confirmation of the three nominees.

Olalekan had appeared before the Senate Committee on INEC, where he said he was an APC member and had contested for local government chairmanship in Osogbo, Osun State.

Omo-Agege argued that since the petitioner accused the nominee of being a member of the APC did not appear before the committee to defend the allegation during screening, it would be unfair not to confirm the nominee.

“He that alleges must prove,” Omo-Agege said.

“The petitioner was not even available to lead evidence against the nominee. I don’t think it would be fair to defer this nomination. He that alleges must prove. I think it is unfair to keep this nominee at bay. I think this nominee should be confirmed.”

Minority Leader Enyinnaya Abaribe urged the Senate to uphold the recommendation of the committee.

He said the Senate cannot afford to get involved in the “murky waters” of determining whether a particular nominee was a member of a registered political party or not.

“What this simply means is that we stood it down which is like a technical language telling the President to make another nomination,” Abaribe added.

Senator Bala Ibn Na’Allah urged the Senate to respect the decision and conclusion of the Committee on INEC to drop Olalekan.

“The spirit of the Ninth Senate has always been to do whatever is practically possible to assist Mr President to govern this country better.

“Now, when the framers of our Constitution gave power to the President to make appointments and refer to the Senate, it was under the understanding that 109 heads would be better than one.

“And the belief is that it is the responsibility of the Senate to assist Mr President to comply strictly with the oath of office he has taken to uphold, protect and defend the Constitution of the Federal Republic of Nigeria.

“Distinguished Senator Gaya is a very ranking senior member of the Senate and he chairs the Committee on INEC. Other distinguished senators that constitute this committee, I am sure, were acting in the spirit of the Ninth Senate to ensure that whatever is practically possible is done to assist the President to be on course for the development of this country.

“So, if the rules of the Senate gave you power to constitute a committee – and with the highest degree of maturity – certain recommendations are made before the Senate. I think we are under obligation to respect the conclusion of the committee.

“I am in this spirit urging my colleagues to take into account the effort, the time this committee put into arriving at this conclusion and to respect the decision of our colleagues, no matter how unpalatable it might be, as far as discharging the functions of the office of the Senate of the Federal Republic of Nigeria is concerned.”

Senate President Lawan urged the Committee on INEC to expeditiously undertake those legislative actions that are necessary to confirm the other nominee, who had to wait.

“The INEC and the National Assembly have to work together to ensure that we refine and sanitise our electoral processes, so that we are able to have the best electoral environment in Nigeria,” Lawan added.