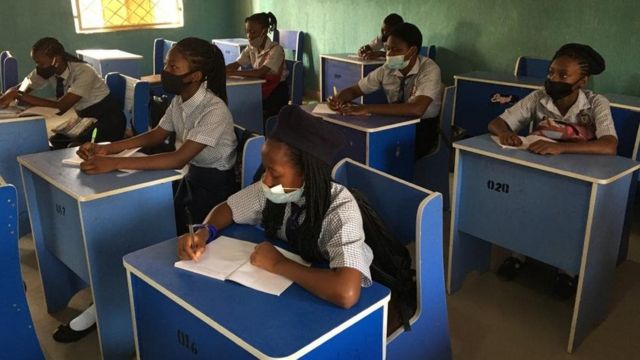 Some private schools in Lagos State on Monday recorded a low turnout of students as the academic activities resumed for the second term of 2020/21 session.

Following the Lagos State Government’s directive on Friday, directed both public and private schools below the tertiary level to resume for the new term.

It was reported some private schools in parts of Lagos, observed that many students in private schools did not turn up for the academic activities,  few students and parents were seen at the private schools like Krisbetel College, Egbeda, Honeyland Schools, Ipaja, Daystar Montessori School, Ipaja and Sophem High School, Iyana-Ipaja.

Most schools had ‘’No face mask, no entry’’ banners with handwash basins, water, soaps, sanitisers and infrared thermometers at their gates.

At Honeyland Schools, Ipaja, few parents were seen coming in to drop their children. The school did not allow parents to wait behind after dropping their children and wards.

Faleke said that parents were not allowed to stay after dropping the children.

“Some of the students have not resumed because of school fees and some parents are also skeptical about resumption because they want to observe before bringing their children back to school.

“We are ready for resumption and COVID-19 is not really affecting our school because we always assess our facilities before admitting students,’’ he said.

A parent, Yemi Shokunbi, urged private schools to also practise the shift system in schools because many parents were scared of bringing their children to school.

Shokunbi said that she believed that students could be learning from home, but with serious supervision from their parents.

“I came to pay my daughter’s school fees, but she is not resuming today until I thoroughly observe the compliance to the COVID-19 protocols.

Another parent, Mrs Aminat Rasaki, said she allowed her children to resume today because both the school and parents had provided the necessary safety materials for the students.

Public schools in Lagos are still maintaining the shift system introduced last year by the state government when it reopened for the first term of the 2020/21 session.

The shift system is to allow observance of the safety protocols put in place by the government to curb the spread of the virus.

At the State Junior and Senior High School, Alimosho, only (JS 3) and (SS 1) were allowed to enter the school premises with the face mask, while those without it were sent home.