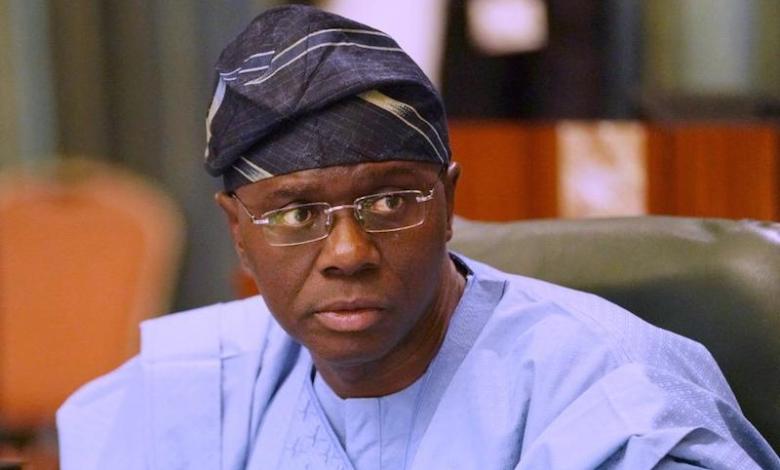 Speaking during the swearing-in ceremony at Lagos House, Ikeja, Sanwo-Olu urged Olakanle to prioritize the welfare of the people.

He urged the new chairman to always be guided by the principles of transparency, accountability, and probity in the management of public resources entrusted in his care.

Olakanle, a former Vice Chairman of Onigbongbo LCDA, became the new council boss following the demise of the immediate past Chairman, Mr. Babatunde Oke, who died on Wednesday, Aug. 12.

Sanwo-Olu, while stressing the need for continuity of good governance in Onigbongbo LCDA, implored Olakanle to see his emergence as council chairman as a ”Call to Duty”.

According to him, a benchmark for performance has already been established by Olakanle’s predecessor in line with the incumbent administration’s T.H.E.M.E.S development agenda.

”I congratulate you on your elevation to the position of Chairman of Onigbongbo Local Council Development Area.

”I urge you to carry on the good works in which you were part of the process of initiation and implementation as Vice Chairman before your swearing-in today.

”To succeed in this new position, you must see yourself as a team leader and not take for granted the goodwill of the people of the Onigbongbo Local Council Development Area.

”The best way to achieve this is to prioritize the welfare of the people and always be guided by the principles of transparency, accountability, and probity in the management of public resources that have been entrusted into your care.

”I charge you to see this opportunity as a ‘Call to Duty’. If you look at our T.H.E.M.E.S. agenda, you will always have things to take on there, to work and administer to your people,” he said.

Sanwo-Olu urged him to commence work in earnest to enable the residents of Onigbongbo LCDA to feel his impact since they had high expectations from him.

The governor said that his administration would continue to sustain the synergy it currently had with the 57 local government chairmen in the state.

”I want to affirm the commitment of our administration to ensure that the socio-economic welfare of our citizens in Lagos State is paramount to us.

”We will continue to sustain the synergy that we currently have with our local government chairmen.

”Indeed we expect that the dividends of democracy would not only be what the state government would do but would also be what the local governments would do,” he said.

Speaking on the former chairman, Sanwo-Olu, who observed a minute silence for the deceased during the swearing-in ceremony, described late Oke as an affable and committed party man who had fantastic dreams for his people.

He said the state government would continue to remember the lasting legacies he left behind, adding that “the greatest respect we can render to his memory is to continue with the vision of development that he had for the Local Council Development Area.

“We will continue to remember the lasting legacies he left behind and the greatest respect we can render to his memory is to continue with the vision of development that he had for the Local Council Development Area.”

Giving a vote of assurance, Olakanle described his emergence as Chairman of Onigbongbo LCDA as a divine offer, assuring the governor that he would work toward the actualization of the T.H.E.M.E.S. developmental agenda.

”I want to assure Mr. Governor that in this assignment that I am being given to do now, I will do it with justice. I will do what I am supposed to do.

”I will try as much as possible to discharge my duties as enshrined in the administrative guidelines of the local government.

”This is an opportunity I never envisaged. Because of this, I am seeing this as a divine offer, which by the special grace of God I am not going to take for granted.

”I am going to commit myself to the service of my local government and in line with the T.H.E.M.E.S. of the present administration in Lagos State,” Olakanle said.