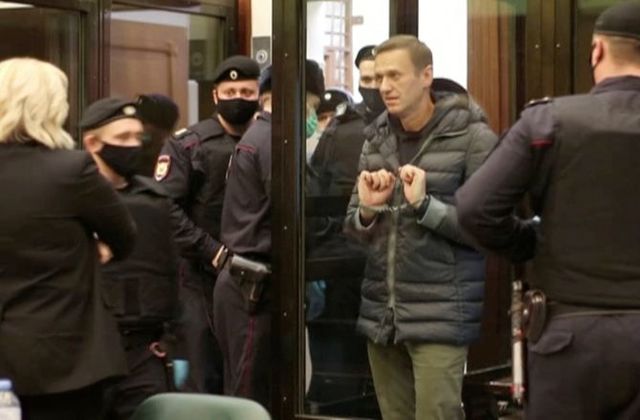 Lawyers for leading Russian dissident Alexei Navalny on Tuesday immediately said they would appeal a controversial 3.5-year prison sentence handed down by a court for a probation violation.

The court had ruled that Navalny should serve jail time for breaking the rules of his probation when he failed to check in with authorities while he was in Germany recovering from a poisoning attack.

According to his lawyers, Navalny may only have to serve two years and eight months of the sentence as a previous house arrest may be taken into account.

Navalny has been on probation since 2014 in a fraud case, which he has long condemned as political and the European Court of Human Rights (ECHR) said involved “arbitrary and unfair” proceedings.

Navalny argued in court there was no way he could have followed the rules, noting that he was comatose at the time he was taken to Germany.

“I was being treated in Germany,” Navalny told the court ahead of sentencing.

But the Russian judge insisted that the terms of the probation apply whatever the circumstances.

“The court has ruled to satisfy the motion of the Federal Penitentiary Service,” said judge Natalya Repnikova as she announced the decision, in a comments.

Navalny used the proceedings to once again pin the August attack, which involved the nerve agent Novichok being applied to his underpants, on Russian President Vladimir Putin, saying the Kremlin leader would go down in history as “Vladimir, the underpants poisoner.”

Navalny said the attack was orchestrated by Putin and that an FSB domestic intelligence agency “hit squad” planted the Novichok in his underpants.

“We have proven that Putin committed this attempted murder,” Navalny said, and now “this little thieving person in his bunker” is going crazy because he had survived.

Putin and the FSB deny involvement.

Multiple independent labs have confirmed the presence of Novichok, which was used in at least one other attempted murder linked to the Kremlin.

Navalny returned to Russia from Germany earlier this month, even though Moscow made clear he would be detained upon arrival.

Since his detention, the country has endured two weekends of mass protests and arrests.

There were many arrests in Moscow on Tuesday evening following the verdict.

Videos on social networks showed Navalny supporters being taken away by security forces in the centre of the Russian capital and brought to police buses.

Human rights activists spoke of more than 850 arrests throughout the day.

Police were already detaining people during the trial, which lasted several hours.

Thousands of people took part in protests, according to estimates by observers.

The crowd chanted “Putin is a thief!” live images showed.

Cars honked in solidarity with the demonstrators.

In St Petersburg, in the country’s north-west, the security authorities also set up barriers in the city centre.

According to human rights activists, there were more than 170 arrests.

Navalny demanded the release of all political prisoners and called for his supporters not to be afraid.

“It’s not hard to imprison me,” Navalny said, adding: “But a whole country cannot be imprisoned.”

Putin has been in power for more than two decades, alternating between the presidency and the office of prime minister.

His rule has been characterised by increasing wealth in the country, but also by ever-increasing restrictions on free speech, the media and political opponents.

It was not clear how the court decided on this.

During the sentencing, Navalny’s wife, Julia Navalnya, broke down in tears and removed her black face mask upon hearing the news.

“See you soon. Don’t be sad. Everything will be fine,” he said to her in farewell.

Internationally, the trial has been criticised as politically motivated, and many see it as a new attempt to silence Putin’s main political opponent.

U.S. Secretary of State Antony Blinken echoed calls by the leaders of Britain, France, and the foreign ministers of Germany, Austria, Poland, the Scandinavian countries and the Czech Republic for Navalny’s immediate release.

The EU will not accept the conviction, according to a statement by European Council President Charles Michel.

“We do not accept his sentence – justice must not be politicised.

”Protesters have the right to demonstrate peacefully and voice their political views,” Michel tweeted.

”It goes against the verdict of (the ECHR), which ruled this case arbitrary and unreasonable,” Borrell tweeted.

Earlier on Tuesday the Kremlin sharply rejected criticism of the trial, particularly from Brussels.

Russia would not accept “admonitions” by the European Union, Kremlin spokesman Dmitri Peskov said according to news agency Interfax.

Gombe to harness potentials of its three dams to boost its economy, says Commissioner

PHOTOS: Man’s skin turns bright yellow after over 30 years of drinking and smoking