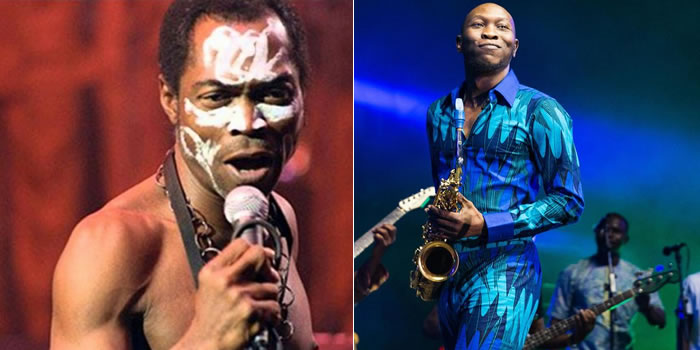 A few weeks ago, the Rock and Roll Hall of Fame published 16 nominees for its 2021 class of inductees, and on the list is the afrobeat originator, Fela Anikulapo Kuti.

Reacting to his nomination, one of the sons of the afrobeat legend, Seun Kuti, said that his father’s nomination into the Rock and Roll Hall of Fame is ‘the least of what his father deserves from the world.’

He said, “I am different when I talk about my dad and what I feel about him. Some people think that it is from a place of arrogance but it is from a place of true understanding. The hall of fame nomination is the least of what my dad deserves from the world. I am not losing my mind over that. Now that you have given him this, what next? When are you giving him the other things that he deserves that you did not give him when he was alive? He deserves it, it is not a favour. The hall of fame is not adding to what Fela is especially for we African people.

“You cannot find any artiste in this world that his people have put him in their hearts like they have put my dad and for me, that is the greatest achievement. Any other thing they want to give him is like celebrating the postman because he delivered the post. Who does that?”

The singer made the statement during the launch of Power Mic, an initiative under his political platform, Movement of the People. Further commenting on his Power Mic initiative, the saxophonist revealed why his colleague Vector came on board.

He said, “The thing about Power Mic is that I made it public and anyone could join but Vector was the only one that showed genuine interest. For me, I do not want Power Mic to be celebrity-driven just the way the Movement Of the People would be filled with celebrities where everybody is following Seun. We want to create something that the people can own and professionals in this country should create the platform. I am not doing all these because I want to be president, I am doing this because we want to create a platform that will identify the right people that can rule this country. This conversation must happen because a bridge must be re-built. A bridge that says that the professionals are now on the side of the Nigerian people. That is basically what Power Mic is about. The motto of Power Mic is Dialogue, Solidarity and Action. We will have a dialogue that will build the solidarity that will lead us into action. We must do this because the poorest people in Nigeria cannot do it.”