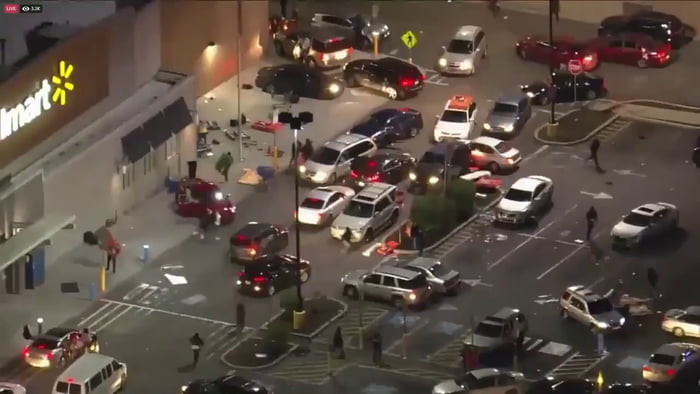 A Walmart store in Philadelphia, United States and other stores were looted on Tuesday night by rioters, local media reports.

This comes after two days of unrest in the state over the killing of a black man, Walter Wallace Jr by officers of the Philadelphia Police Department.  Police and rioters have clashed since.

A video uploaded on Twitter showed rioters carting away with proceeds of looting including, televisions and other goods from a Foot Locker store and a Walmart in the Port Richmond neighbourhood, northeast of the city centre.

Democrats are looting (again) tonight. This is Walmart in Philadelphia. pic.twitter.com/I8MUtifkB5

According to the police close to 1,000 people were involved in the looting.

Wallace, a 27-year-old Black man, was shot and killed during a confrontation with police in West Philadelphia Monday. His family has said he suffered from bipolar disorder and was in crisis during the time of the shooting.

Philadelphia cops fatally shot Walter Wallace Jr. today, firing 10+ times at him while he stood at least 10ft away. He allegedly had a knife but cops made NO attempts at de-escalating the situation in this video. They went straight to killing Wallace in front of his loved ones! pic.twitter.com/U2zYGqK7Ag

Wallace’s family has asked that protesters keep their demonstrations peaceful to respect his memory.

“All this violence and looting. I don’t want to leave a bad scar on my son and my family with this looting and chaos stuff,” Walter Wallace Sr. told CNN. “So I want my son’s name and everybody to stop this. Give my son a chance. And the family like we’re decent people.”

“Everybody to have respect for our family, to pray for us. Cut it out. The looting is a mindset and it won’t bring my son back. And it won’t, it will escalate things to get worse instead of better,” he added.

Fayemi vows to engage youths for tourism development in Ekiti