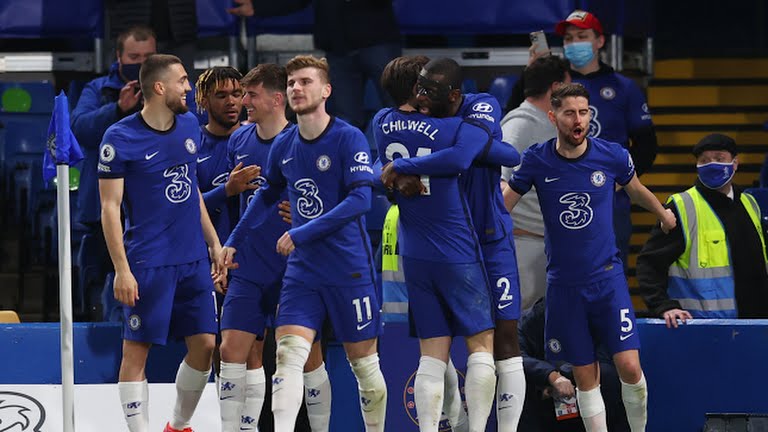 Thomas Tuchel’s men secured sweet revenge against Brendan ROdgers’ side following their 1-0 defeat at the FA Cup final on Saturday.

The German who was caught offside for the first goal had his second ruled against by VAR having handled the ball into the net but he wasn’t to be denied a third encounter with VAR as he was brought down in the box by Wesley Fofana who gave away a penalty to the hosts.

Jorginho stepped up to slot in a sweet trademark penalty in the 66th-minute, leaving Kasper Schmeichel like a statue as the ball strolled into the net to give Chelsea a 2-0 lead.

Rodgers introduced his talisman, Kelechi Iheanacho and his introduction gave the visitors a boost as they began to press the hosts.

A Nigerian connection between Wilfred Ndidi who caught Mateo Kovačić napping and Iheanacho gave Leicester a boost as the latter found the back of the net to make it 2-1 in the 76th minute.

Ayoze Perez fumbled a golden opportunity with few minutes to the whistle but he booted the ball above the bar as Chelsea’s Mendy looked on helplessly.

Tempers flared towards the end of the game as both sides got physical but the scoreline remained the same as the Blues took a commanding position in the top-four race into the final day of the season.

Chelsea now have 67 points, pipping Leicester by a point into third place and the Foxes could drop to fifth if Liverpool who have 63 points win their game at Burnley tomorrow.

The defeat to Leicester confirmed Manchester United’s automatic second-place finish despite playing a 1-1 draw at home to Fulham earlier today.

The Foxes face a daunting task away to Tottenham in their last match of the season as Chelsea visit Aston Villa while Liverpool host Roy Hodgson for his last game with Crystal Palace.

It’s not over, Tuchel warns Chelsea players after Leicester defeat