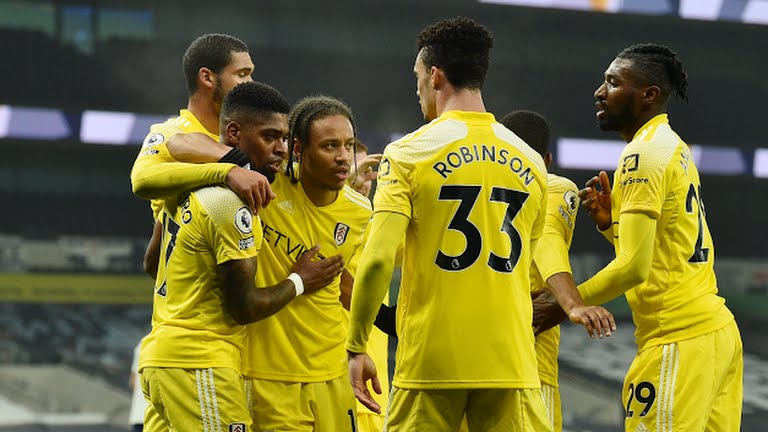 Scott Parker’s Fulham side gave a sturdy display at the Tottenham Stadium to hold Jose Mourinho men to a 1-1 draw on Wednesday night.

Relegation-threatened Cottagers needed a win to move out of the drop zone after Manchester City defeated Brighton by 1-0 but Fulham’s hopes were dashed when they fell behind in the first half to a Harry Kane header.

The Spurs’ skipper netted in the 25th minute after much pressure on the visitor’s goal by burying his header beyond Areola from a Reguilon cross.

Fulham held the fort and would have their keeper, Alphonse Areola to thank for denying Son in the first half as the home team missed chances to bury the game early.

Both teams switched halves and Mourinho watched his team exchange the form that earned them the lead and soon squandered their advantage.

Spurs relaxed and Parker’s men kept pushing with most of the second half possession going their way and the reward came in the 74th minute when substitute Aruna Lookman made an instant impact with a cross that found the head of Ivan Cavaleiro who beat Hugo Lloris.

The equaliser came moments after Son Heung-Min failed to bury the game by hitting the woodwork.

Tottenham have now won just one in their last six Premier League matches with three draws and two defeats to Leicester and Liverpool.

Meanwhile, since their 2-0 loss to Manchester City on December 5, Fulham have now gone five games unbeaten in the league, drawing five consecutive Premier League games, their longest such run since January 2007 (six games).