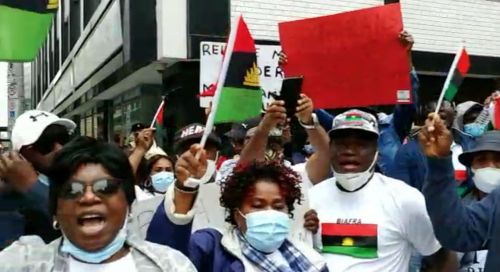 Scores of Biafran agitators on Friday stormed the British Embassy in Berlin, Germany, where they protested the arrest and continued detention of Nnamdi Kanu in the custody of the Department of State Services.

WuzupNigeria reported how Kanu, who has been declared wanted after jumping bail in Nigeria, was arrested and extradited allegedly from Kenya last week.

SaharaReporters reported that hundred of Nigerians were seen on Friday marching towards the embassy singing Igbo solidarity songs and carrying Biafra flags and placards with different inscriptions.

Many of the demonstrators wore customised shirts with Biafra boldly written on them.

The Biafran agitators made use of the public address system to register their presence in front of the embassy.

Sources disclosed that the protest had been announced a few days earlier calling Igbo patriots to gather by 10 am on July 9.

Recall that Kanu’s lawyer, Aloy Ejimakor, had earlier claimed that the British High Commission in Nigeria had acknowledged receipt of the letter written on behalf of the IPOB Leader, Kanu, seeking its support as a British citizen.

Ejimakor, who made the statement, on Tuesday said the British authorities guaranteed the protection of Kanu’s welfare.

According to him, the letter specifically stated that Kanu will get the “support and welfare” of the British authorities.

Kanu through Ejimakor had petitioned the British High Commission, requesting “That Mr Kanu be granted every possible Consular Assistance to which he is entitled as a British citizen.”

JUST IN: Petrol tanker crushes 15 students to death in Delta