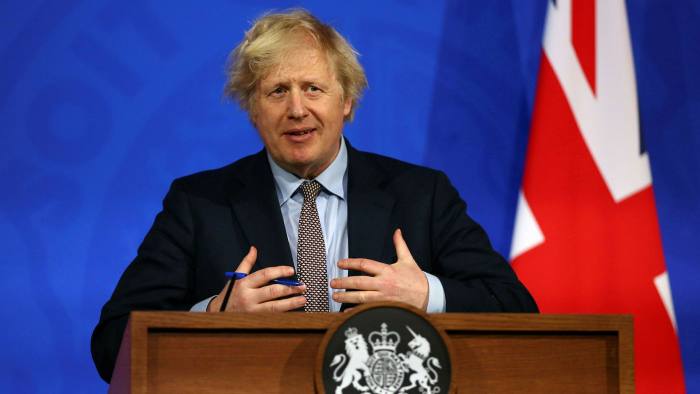 Prime Minister Boris Johnson has cancelled the reception planned to celebrate the achievement of England’s Euro 2020 team amid an infuriated dispute over racial abuse aimed at black players after Sunday’s final defeat.

Gareth Southgate’s men reached the country’s first major final in 55 years but failed to win the trophy against Italy by losing on penalty shootouts after misses from Marcus Rashford, Jadon Sancho and Bukayo Saka.

The three players were subjected to online racial abuses as a result of the defeat at Wembley on Sunday night and the events that followed forced Downing Street to call off the reception.

DailyMail reports that England’s Home Secretary Priti Patel came under fire after she was accused of “stoking the fire” with her pre-tournament criticism of players who take the knee.

Johnson was forced to defend Patel today after Three Lions and Aston Villa defender Tyron Mings took aim at the embattled last night, saying she had “no right” to condemn the barrage of online racist abuse against fellow stars.

“You don’t get to stoke the fire at the beginning of the tournament by labelling our anti-racism message as ”Gesture Politics” and then pretend to be disgusted when the very thing we’re campaigning against, happens,” Mings replied to Patel’s tweet last night.

Patel had hit out at the abuse but has faced accusations of hypocrisy after earlier saying players who took the knee were engaged in ‘gesture politics’ and backing supporters who booed them for doing so.

Asked about a reception today the PM’s spokesman said: “We will be talking to the FA to identify a suitable way for the PM to thank the players and the coaching staff for their efforts.”

The ranks of those criticising the Home Secretary expanded today to include the former Tory defence minister Johnny Mercer, who said that Mings was “completely right”.

But Mr Johnson’s official spokesman today told reporters: ‘The Home Secretary is working every day to clamp down on hate crime, racism and violence.

“There is no place for racism in this country and she is backing the police to hold those responsible for this abuse accountable.”