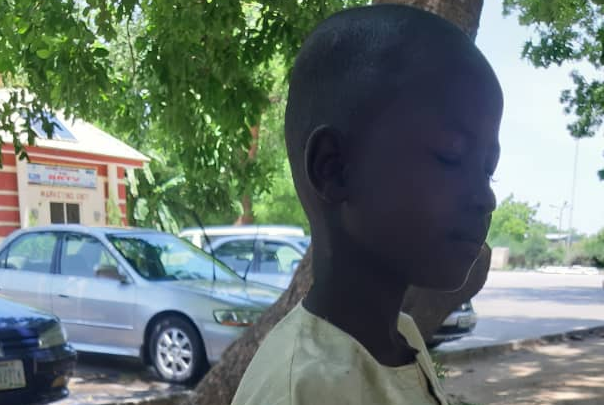 A seven-year-old boy, Abba Mustapha, who was unfortunate to witness his parents killed by Boko Haram insurgents has been found wandering and rehabilitated in Maiduguri, capital of Borno State.

Mustapha was allegedly found by a “Good Samaritan” who dropped him off him at the state-owned broadcast station (BRTV) on Thursday.

Further interrogation by the management BRTV revealed that one Hajiya Bintu from Monguno had brought the depressed lad to Maiduguri after insurgents killed his parents.

Daily Trust reported that the boy went through a harrowing experience after his foster parent enrolled him in a Quranic school in Bulumkutu, where the teacher flogged him severely over his inability to recite the Quran.

He further disclosed the perennial torture made him wandered off before the Good Samaritan found him.

“My name is Abba Masta (Mustapha)… Boko Haram killed my father. My mother is in Monguno, upon asking how he came to Maiduguri.

“I didn’t see my mother again in Monguno and Hajiya Bintu brought me to Maiduguri, I am an Allamjinri. Mallam asked me to read but I cannot read so the Mallam started beating me.

“Someone brought me to this place yesterday and left. My back is paining me, “Abba said.

Meanwhile the Commissioner for Women Affairs, Hajiya Zoawara Gambo, has directed that the boy should be immediately taken to a rehabilitation centre in Bulumkutu.

Police places Osun community on the alert after robbers threat