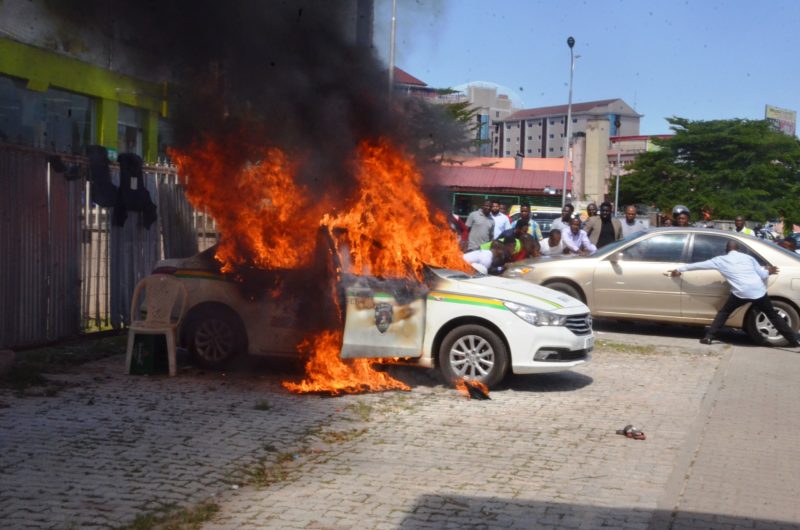 Some commercial motorcycle operators otherwise known as ‘Okada’ riders burnt a police patrol van in Eket, Akwa Ibom state in protest against the alleged killing of two of their colleagues by policemen in the State

The Nation reports that the protest is coming just a week after the police allegedly killed an ‘Okada’ rider in Uyo which sparked a wild protest resulting in the torching of NTA station and destruction of property in the capital city.

It was gathered that the Okada riders and policemen in Eket have been at loggerheads over the enforcement of the order regulating the operation of motorcycles in the area.

It was gathered that Eket local authorities had ordered Okada riders to operate between 6 am and 6 pm.

The government had said the decision was to check the rise in crime in the area.

Some Okada riders were alleged to have flouted the restriction order by operating beyond the time stipulated by the government.

An eyewitness Emman Okposin said the police surveillance team chased them away from the road from 5:30 pm as against the 6pm deadline and that they beat his colleagues and impound their motorcycles.

Okposin said on Sunday night one of their members was shot dead by the police while chasing the operators from the road.

“Last Sunday our member was shot dead in the night and the corpse has been deposited in the mortuary at Immanuel General hospital, Eket.”

He added that the incident that led to their revolt occurred on Monday when a policeman beat a motorcyclist to stupour before the victim died at the hospital.

“Our member Udo from Idung Udoe in Eket died last night from injuries he sustained in the hands of police so we revolted.”

Okposin said the youths and all motorcycle operators took the corpse to Eket local government council and later to the area police station as the council chairman Frank Archibong was not available to address them.

Okposin said the police prevented them from entering their station and they returned the corpse to the mortuary.

He said all the Okada riders and the youths regrouped and moved to police checkpoint along James Town road where they burnt down police patrol vehicle but the officers at the checkpoint escaped.

Police spokesman, Odiko MacDon who confirmed the incident said that 19 suspects have been arrested in connection with the fracas in Eket.

MacDon said the suspects arrested had defied government’s restriction order which allows Okada riders to operate between 6 am and 6 pm.

He insisted that the police cannot be intimidated to stop the enforcement of government’s directive.
Related Topics:Akwa IbomNigeria Police ForceOkada ridersProtest
Up Next