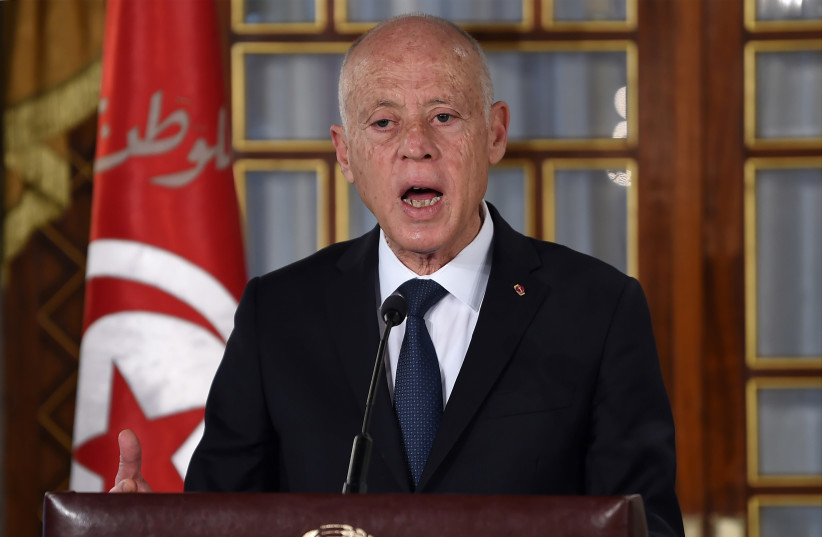 The Tunisian president is at the centre of a controversy, sparked by remarks considered to be “anti-Jewish”, an accusation immediately denied by Tunis.

In a statement made during his visit to the popular district of M’nihla-Ettadhamon, near Tunis, on Tuesday,  President Kaïs Saied attacked the instigators of acts of looting and vandalism perpetrated during the unrest that has shaken the country for several days.

His words, difficult to decipher, even phonetically inaudible in the recording, have been interpreted as an accusation addressed to Jews described as “thieves”, according to the perception made, in particular, by the Conference of European Rabbis (CER).

Literal translation in Arabic of “those who steal…” and “Jewish thieves” are similar and confusing.

Reported by Israeli websites, including “Israel national news”, the CER published a press release in which it expresses “its deep concern following the serious and public remarks made by Tunisian President Kaïs Saïed, accusing Jews of being responsible for the instability in the country”.

He urged the Tunisian President to withdraw these remarks, which “constitute an immediate threat to the physical and moral integrity of Tunisian Jewish citizens”.

Chief Rabbi Pinchas Goldschmidt, president of the CER, said on Wednesday, “we consider that the Tunisian government is the guarantor of the security of Tunisian Jews. Such allegations threaten the integrity of one of the oldest Jewish communities in the world”.

According to the legend, Jews have been living in Djerba, an island in southern Tunisia, for more than 2,500 years following the destruction of the Temple of Solomon by the Babylonians. Their number is currently estimated at around 1,500 people.

The reaction of the Tunisian authorities was instantaneous. In a statement issued Wednesday evening, the Tunisian presidency protested against “the spread of false information”, calling it “lies” and “slander”.

It maintained that in his statement to M’nihla, “the president did not mention any religion and there were no reasonable grounds for dealing with the issue of religions in the context of (social) protests, especially since the head of state considers this issue does not arise in Tunisia”.

Faced with the outcry caused by the “misinterpretation” of his remarks, President Saied had a telephone conversation on Wednesday with the Chief Rabbi of Tunisia, Haim Bittan, to reassure him that “Tunisians of the Jewish faith are citizens benefiting from the care and protection of the Tunisian state, just as much as other citizens”.

The communiqué also recalled the “firm position (of the Tunisian president) regarding the Palestinian cause, making a distinction between religious freedom and the right of the Palestinian people to their land. A right considered as a constant principle that no one can question”.