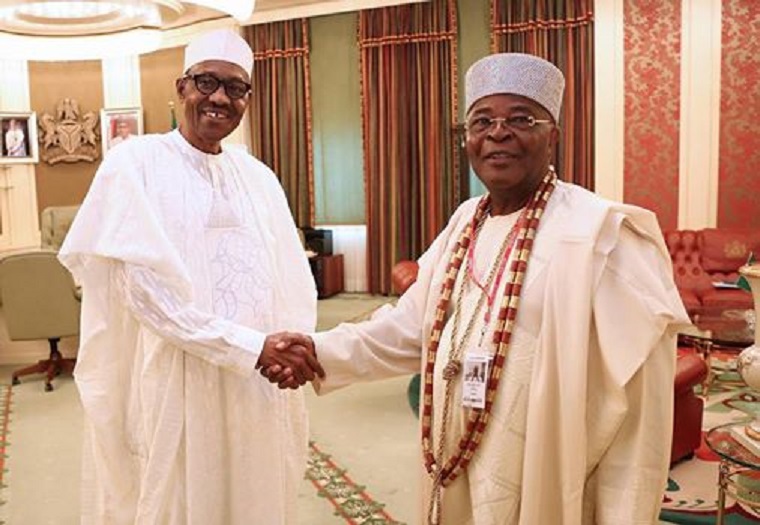 President Muhammadu Buhari on Thursday receives behind closed-doors the Alake of Egbaland, His Majesty Oba Michael Aremu Adedotun Gbadebo 111 at the State house in Abuja.

The meeting which lasted less than an hour took place inside the President’s office.

Nobody accompanied the traditional ruler to the meeting which was described as “private.”

The agenda of the meeting was also not made known.

The monarch did not speak with State House correspondents at end of the meeting.

The Presidency also did not issue any statement on the meeting.

Shortly after the meeting, Buhari also granted audience to a former Speaker of the House of Representatives, Alhaji Ghali Na’Abba.

The meeting also took place behind closed-doors inside the President’s office.

Also on Thursday, the President received a retired Justice of the Supreme Court, Justice George Oguntade, in his office.

No statement was issued on the agenda of the separate meetings neither did the President’s guests speak with journalists at the end of the meetings which were all described as “private.”

According to the photos posted on Facebook by Femi Adesina, the Special Adviser on media and publicity to President Buhari, both leaders were shown smiling as they shook hands at the State house in Abuja.

Below are photos of both leaders:

President Buhari in an hand shake with Alake of Egba land

It would be recalled that President Buhari was on a working visit to Zamfara state on Wednesday where he commissioned road projects by the state government.

Buhari was received in the state by the State Governor, Abubakar Yari, and his Sokoto State counterpart, Aminu Tambuwal.

REVEALED: Faces of lawmakers accused of looking for ‘Ashawo’ in America [Photos]