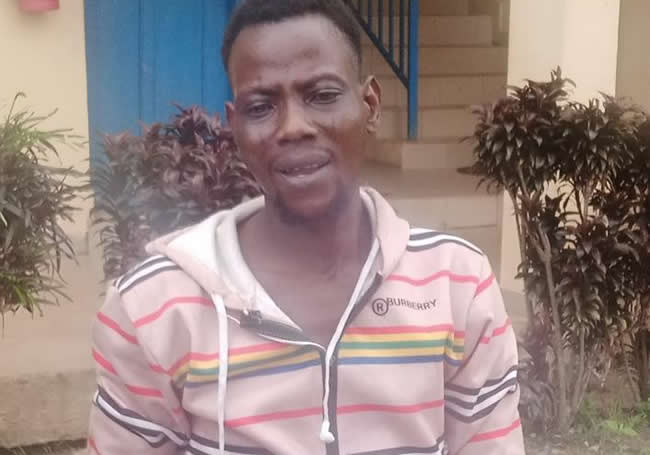 Operatives of the Osun police command, on Monday, revealed the identity of the lady allegedly murdered in Apomu by her boyfriend, Akin and his friend, Kabiru Oyeduntan, for ritual purposes.

The victim, identified as Toyin Adewale, was allegedly murdered at the residence of Oyeduntan at the Agunla junction in the town last Thursday.

When paraded before journalists, Oyeduntan claimed that Akin, a herbalist, brought the deceased, who was his girlfriend, to his room and strangled her while he assisted him in holding the victim’s legs, PUNCH reports.

Oyeduntan explained that Akin, who had earlier told him of plans to engage in money rituals, decapitated Toyin and parked her parts in a box.

He added that he was arrested on his way to the market, where he had gone to buy Indian hemp, while Akin fled the town, but he was later arrested in Ibadan, Oyo State.

The state Commissioner of Police, Wale Olokode, while giving an update on the incident on Monday, said one Ayinla Adewale, who is the father of the deceased, gave her name as Toyin.

Olokode said two other suspects had been arrested in connection with the killing of the 18-yead-old Toyin.

He stated, “Two other suspected ritualists have been arrested in connection with the murder. They are Ramoni Rilwan, 27, and Najeem Ayeloja, 30, both from Apomu.

“The identity of the victim is now known through her father. One Ayinla Adewale, said to be father of the deceased, identified her as Toyin Adewale, 18. We are assuring members of the public that the remaining ritualists will be arrested.”