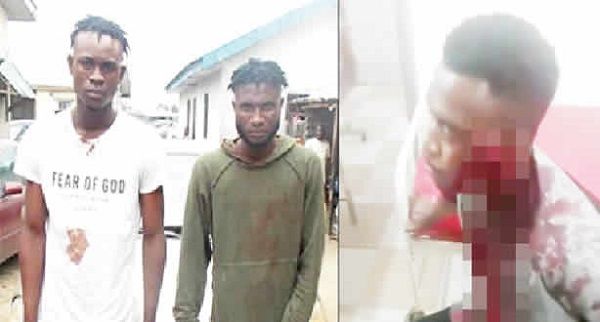 The thieves whose identities remain yet unknown were nabbed by officers from the Lagos State Police Command for alleged dispossession of a Toyota Corolla from one Utibe around the Ibeju-Lekki area of Lagos State.

The two suspected thieves ordered a ride around Lagos Business area from Utibe, who happens to work for Bolt, a popular car-hailing company.

It was revealed that the men during the trip stabbed the driver with sharp objects and dispossessed him of the car.

This revelation was made public by Utibe’s friend with the Twitter handle @sama_on_point.

He revealed that the two men ran off with the car after inflicting injury on the driver.

From his statement, the two suspected robbers decided to sleep in the car after its sudden halt on the way.

They thought the abrupt stop was due to a lack of fuel in the car.

Unfortunately for them, the police were able to locate them through the help of the tracker installed on the vehicle.

The Police Public Relation Officer for Lagos, Olumuyiwa Adejobi disclosed that the two suspects attacked the identified owner of the Toyota Corolla with the plate number “LND 448 GH” around 11:30 pm on Sunday 20th of September 2020.

He also confirmed the arrest, which was carried out at Abijo GRA, Ibeju-Lekki. According to him, a distress call was put out to the force, which made Area Commander of Area J in Ajah to send in a team to track down the stolen vehicle.

The team was able to recover the stolen car with the driver being rescued as well.

The police team sent to make the arrest was also able to retrieve a blood-stained axe and one knife from the two suspects. Utibe is currently receiving treatment at one hospital within the state after sustaining a deep cut injury on his face.

Hakeem Odumosu, who is the police commissioner in the state, has given an order for the case to be handled discreetly. He also gave a stern warning to those who perpetuate in different forms of crime to stop and leave the state or face the full wrath of the law.