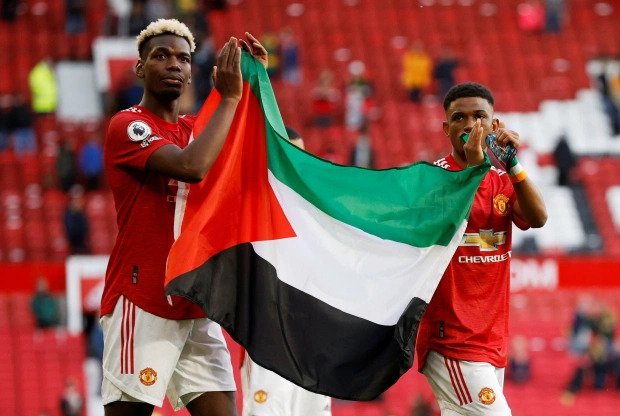 The two players were caught on camera raising a Palestinian flag after United’s 1-1 draw against Fulham at Old Trafford.

The Red Devils welcomed 10,000 fans back to the stadium for the first time since COVID-19 intervention but Edinson Cavani’s stunning goal in their last home game of the season was marred by a Fulham leveller through Joe Bryan as both sides shared the spoils.

After the whistle, United players appreciated the fans but Pogba and young Diallo were seen raising the Palestinian flag, amid the ongoing conflict between Israel and Palestine.

UK Sun reported that the duo are third and fourth Premier League players to show support for Palestine in recent days after Leicester City’s Wesley Fofana and Hamza Choudhury did same in their FA Cup final victory over Chelsea on Saturday.

Reports revealed that the FA frowns against the display of political symbols (by clubs or individuals) in order to maintain impartiality.

Although the players have not faced any sanction for the act, the FA rule states that “Sport and in this case football must never be used as a platform for either politics or racism.”

Scores of people have been killed, including women and children, in the ongoing conflict with thousands of missile exchanged between Israel and Palestine.