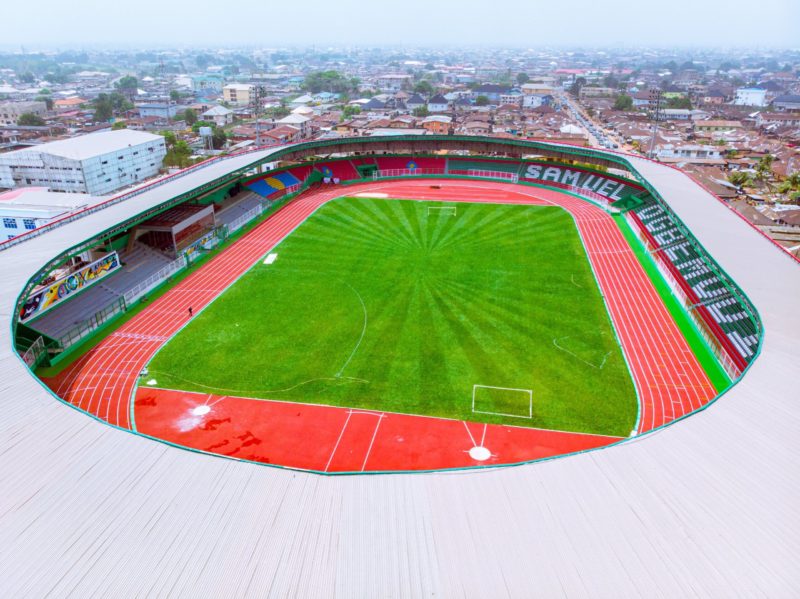 The President of Nigeria Football Federation (NFF), Amaju Pinnick, has described the renovated Samuel Ogbemudia Stadium in Benin as a “world-class” edifice.

Pinnick made the comment on Monday in Benin during an inspection tour of the facility and added that it had undergone tremendous improvement since the last time he visited.

Pinnick was led on the inspection by the Deputy Governor of Edo, Philip Shaibu.

The Super Eagles of Nigeria are scheduled to play their 2021 Africa Cup of Nations (AFCON) qualifiers against the Leone Stars of Sierra Leone at the Samuel Ogbemudia Stadium on Nov. 13, 2020.

Pinnick said his visit was to see things for himself so as to report to members of the NFF Executive Committee.

“There is a tremendous improvement compared to the last time I came, the turf is very brilliant, it’s what you see in world class facilities. I thank the government of Edo for this facility and we are proud of this achievement.

“The Super Eagles can’t wait to come and play in the state. I’ m in touch with the players, who are all excited to be here to play for the country, especially Ahmed Musa, the captain of the team, whose mother is from Edo and he is anxious to play for the nation and his state.

“The NFF will move into the state on Nov. 9, while the players will start arriving from Nov. 11 and after the game make preparations to fly to Sierra Leone on Friday or Saturday after the game.

“I will communicate all I have seen here to the Ministry of Youths and Sports and also the Executive Committee. I am happy with what we have seen here today and the Supper Eagles will be playing here for a long time.

“We are also going to bring the Super Falcons here to play; they are the must successful team in Africa, you know this is home, like I told you, I made a promise on behalf of the federation, that is promise kept.

“And also, we’ve always being thankful to Edo government for being there for Nigeria football federation, and we thank them for that generosity at every point in time because these are very sensitive times.

“We are also working because they have been a lot of people coming into the stadium, we have to observe the COVID-19 protocol to the letter. They have written to us officially, this is about 15, 000 sitting capacity stadium.

“They want about 6,000 to 7, 000 where they will sit out to observe social distancing, so we are going to look at it, we will send a letter to the ministry and also send a letter to Presidential Task Force, once we get the approval within the next two days we will send.

“I have already spoken to CAF, we will send a representative of CAF and I will want a situation whereby people will be seen decent crowd in the stadium in a very competitive game in Edo.

“We are working towards reducing every mistake humanly and materially possible and ensure we have success.

“The team is like coming home to meet your brother but we will just quietly beat them home and away.”

On the newly-installed Video Assistant Referee (VAR) equipment in the stadium, Pinnick said he had told Gov. Godwin Obaseki and his deputy Shaibu to showcase whatever facilities they have in the stadium.

“You have to showcase whatever facilities you have in Samuel Ogbemudia stadium, we have to write to CAF for approval of the usage of the VAR, but we are very excited about it,” he said.

In his remarks, Shaibu assured that the state was excited to host its first international game in the newly-renovated stadium.

“That was what it was intended to achieve, to have both national and international games here, and we are also excited that in the course of building this stadium, we followed international standards.

“We were all in touch with NFF while we were building the stadium to also guide us with all the FIFA necessary facilities we need to put in place.

“I want to use this medium to appeal to Edo people, that there is going to be a lots of games here, this one, we will not have full capacity spectators, we are going to admit half into the stadium.

“We are going to make sure that they are well spaced to meet COVID-19 protocols, so we are very ready and excited, only that we are going to appeal to our president so that we can use our VAR facilities, so that the doubting Thomas will know that there is actually VAR in this stadium,” he said.