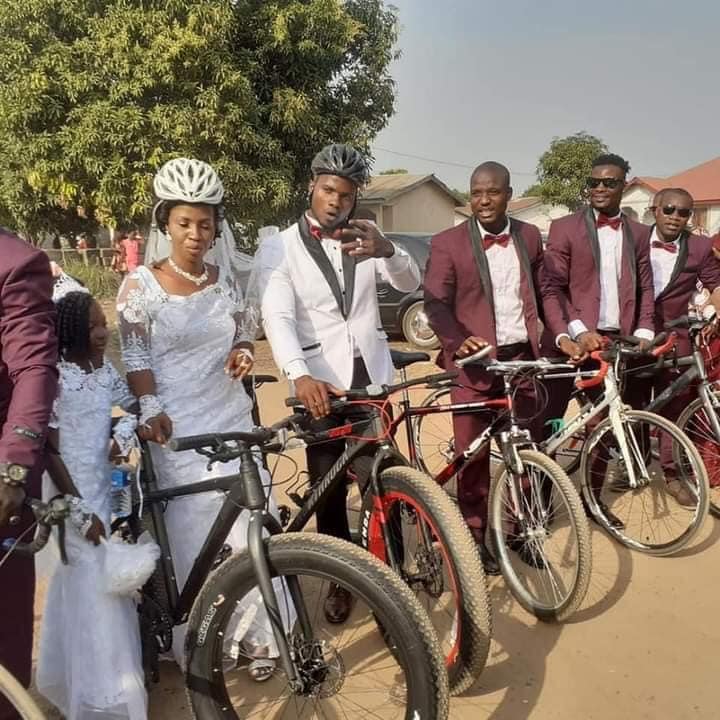 A couple has tied the knot riding a bicycle to their wedding venue.
This happened in Makeni, Sierra Leone when the country’s female cyclist, Isata Sama Mondeh decided to settle down with her lover.
According to Sierraloaded, the ceremony which was graced by a number of cyclists in Sierra Leone has now become the talk on social media as the couples and friends opted for bicycles instead of conventional motor vehicles.
Isata Sama Mondeh who is Sierra Leone’s current fastest female cyclist is also the first female bicycle mechanic in Sierra Leone.
Isata is also the first female bike mechanic to own a bike shop which a number of cyclists working under her.
Isata had participated in the Tour de Lunsar where She won the first position in the female category. As Sierra Leone’s first female mechanic, she is breaking stereotypes and working hard to build up a business that might support her and her family.
She convincingly uses her experience as evidence when she talks to girls, families and community members and she addresses traditional cultural view head-on.
Watch the video below:
MORE READING!  VIDEO: See interior of Don Jazzy's beautiful new crib
Related Topics:BicycleFeaturedSierra LeoneWedding
Up Next