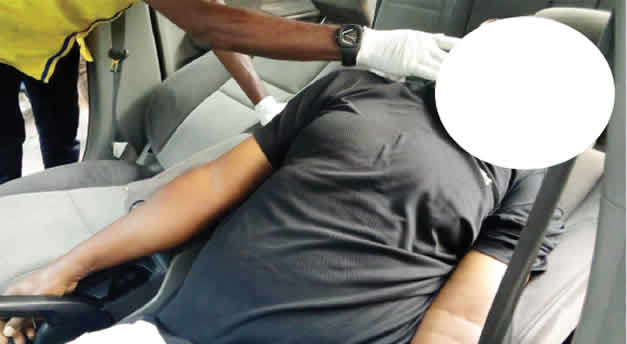 A middle-aged man simply identified as Mr Akpomedaye, has slumped and died in Lagos while driving.

Many passersby were shocked by the sight of the man who slumped and died on Friday while driving along CMD Road, Magodo, Lagos, The PUNCH reports.

It was learnt that the man lived in Magodo Phase II and was driving out in a Honda Accord when he suddenly pulled over close to a police checkpoint linking Otedola Bridge, where men of the Rapid Response Squad are usually stationed.

A 43-second video of the scenario showed Akpomedaye, dressed in white shorts and a black T-shirt, lying lifeless on the reclined driver’s seat as a team of the Lagos State Emergency Management Agency Response Unit checked his pulse.

One of the motorists, who witnessed the incident while plying the route, Ayobami Ladipo aka Mr Porsche, lamented late response of the LRU team, adding that the emergency responders arrived more than one hour after distress calls.

“I live at Magodo Phase 1, Isheri. Around 2pm, I was driving home when I saw about three cars in front of me pull over. I noticed that people were looking at a Honda Accord car. I also pulled over and alighted. I got to the spot and realised that the man in the car had slumped.

“He was driving himself and had a seat belt on. He was in the middle of the road. I noticed that he was still shaking somehow. I thought it was an attack. He was still moving slightly and I called the emergency line. I made sure that nobody went close to his car to touch him because of COVID-19 and so that he would not be robbed. People poured water on him and reclined his seat so he could be in a state of rest.

Ladipo explained that a family member of the deceased who came to the spot said the deceased lived in Magodo Phase II.

He added, “The family member also identified him as Akpomedaye. The LRU team said they don’t carry dead bodies so they made an arrangement for an ambulance which took his corpse away.”

However, LASEMA General Manager, Dr Olufemi Oke-Osanyintolu, said the agency got a distress call at 3.49pm and arrived at the scene at 3.52pm.

He said, “At 3:49pm, a team was dispatched to Otedola Bridge inward CMD Road to attend to an incident. On arrival, the victim, a middle-aged man, was lying lifeless inside his vehicle. The information we got from an eyewitness was that he slumped over an hour before the arrival of the team.

“The vital signs were checked, pulses were absent, pupils were fixed and dilated. The patient was dead already. The victim’s relatives who were already present at the scene agreed to transport him to the nearest morgue.”

Girl, 10, chokes self to death while ‘taking part in shocking TikTok challenge’