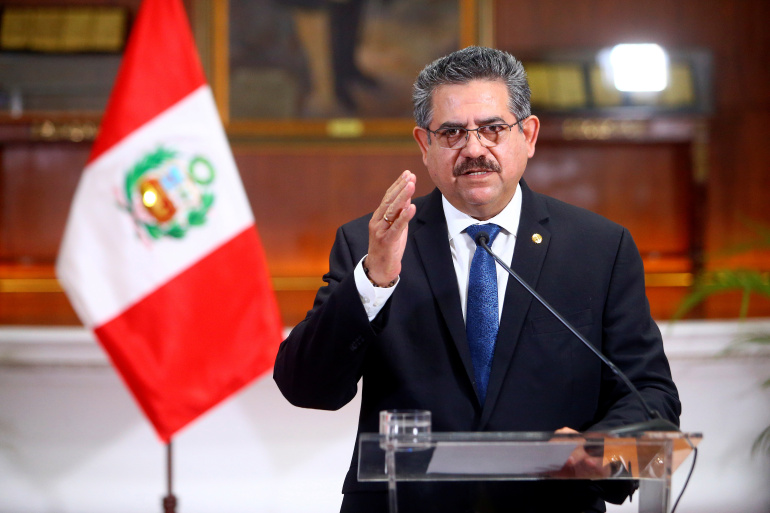 The interim President of Peru, Manuel Merino, has resigned following the death of two protesters as police heavily clamped down on pro-democracy demonstrations on Saturday.

Merino’s resignation comes less than a week after he replaced his predecessor Martin Vizcarra who was ousted by the opposition-dominated Congress’ vote over bribery allegations.

“I want to let the whole country know that I’m resigning,” Merino said in a televised address on Sunday. He added the move was “irrevocable” and called for “peace and unity”.

Merino insisted he acted within the law when he was sworn into office as chief of state on Tuesday, following congress’s removal of the elected president in an impeachment vote.

While Vizcarra denied any wrongdoing, protesters accused the legislature of staging a parliamentary coup, breeding criticism of Merino’s ascension and a call for his resignation.

According to Aljazeera, the unrest had been largely peaceful until Saturday night, with Peru’s Ombudsman warning on Twitter late Saturday that security forces had begun “misusing force and throwing tear gas without justification” against young protesters who had gathered in the centre of the capital city of Lima.

The former president expressed his sadness over the deaths. “I deeply regret the deaths caused by the repression of this illegal and illegitimate government,” Vizcarra wrote. “My condolences to the families of these civil heroes who, exercising their right, went out in defence of democracy and in search of a better country. The country will not allow the death of these brave young people to go unpunished.”

Trump declares himself winner of 2020 US election

JUST IN: Boris Johnson self-isolates after contact with positive case