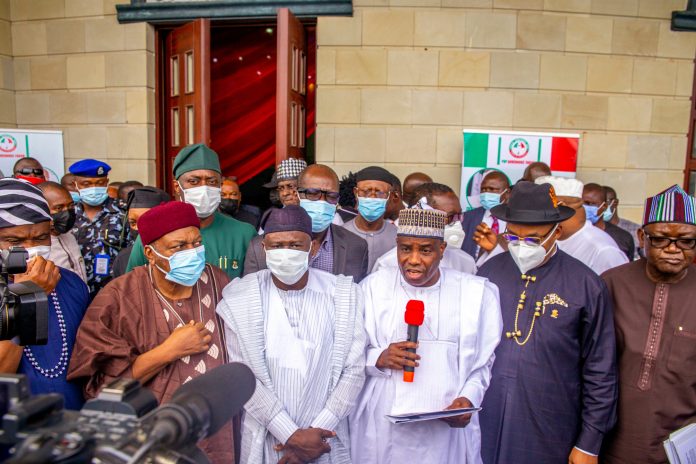 Governors elected on the platform of the Peoples Democratic Party have slammed the Senior Special Assistant to the President, Garba Shehu, over his poorly worded response to a communique issued to the presidency.

Following their meeting in Uyo, Akwa Ibom State capital, the PDP Governors’ Forum, with a view to making more money available to states to execute their developmental projects, had urged the Revenue Mobilization Allocation and Fiscal Commission to review revenue sharing formula, amongst other suggestions, including the appreciation of the naira against the dollar.

In response, Shehu on behalf of the President, Major General Muhammadu Buhari (retd), said the PDP governors were seeking more money “for their own profligate political ends,” adding that “an appreciated currency will benefit those spending on luxury items abroad; being the leading desire of a typical PDP governor,” according to Vanguard.

However, a statement titled, ‘Presidential Response to PDP Governors’ Forum Communique Is a Disgrace,’ which was issued by the Director-General of the forum, C.I.D. Maduabum, in Abuja, on Thursday, the governors expressed disappointment at the Nigerian government’s response to their communique.

The PUNCH quoted Maduabum as saying, “It is unbelievable that such low-quality response could come from Nigeria’s seat of power.

“He celebrates the non-remittance of funds by NNPC to the Federation Account because they should not ‘break the bank’ for PDP Governors. What a pity!

“The duty and responsibility of NNPC to pay revenues into the Federation Account is not a matter of discretion by NNPC. It is an imposition of law.

“The constitutional provisions on Public Revenue are clear. Section 162. (1) of the Constitution says: ‘The Federation shall maintain a special account to be called ‘the Federation Account’ into which shall be paid all revenues collected by the Government of the Federation, except the proceeds from the personal income tax of the personnel of the Armed Forces of the Federation, the Nigeria Police Force, the Ministry or Department of Government charged with responsibility for Foreign Affairs and the residents of the Federal Capital Territory, Abuja.”

The PDPGF equally noted that it was sad that the presidential aide glossed over the economic dangers inherent in the fall of the naira against major currencies of the world, especially the United States dollar.

Maduabum said, “The implication of the fall of the naira for cost of goods and services, including the price of food and basic needs of Nigerians is becoming unbearable for the average Nigerian.”