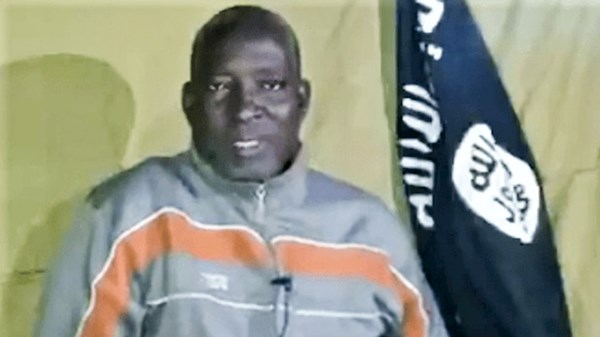 Another Boko Haram captive in Nigeria is forced to plead for his life, yet is at peace with death because Jesus “is still alive.”

A hostage video released last week by Boko Haram  did far more than issue another plea for rescue from a Nigerian Christian. It revealed a modern-day Shadrach.

“By the grace of God, I will be together with my wife, my children, and my colleagues,” said Lawan Andimi, a Church of the Brethren in Nigeria (EYN) pastor in the troubled northeastern state of Adamawa. “[But] if the opportunity has not been granted, maybe it is the will of God.

“Be patient, don’t cry, don’t worry. But thank God for everything.”

It is testimony even to his Islamist captors, said Gideon Para-Mallam, the Jos-based Africa ambassador for the International Fellowship of Evangelical Students.

“This is completely different from most hostage videos,” he told CT. “ Andimi appeared as one who has already conquered death, saying to his abductors and the rest of us that he is ready to die for his faith in Christ.”

Andimi’s home area of Michika was attacked by armed terrorists the evening of January 2 which led to local residents fleeing into nearby bushes and hills.

“Our people had to run helter-skelter when they heard that the terrorists were approaching the town,” Zakariah Nyampa, a member of Nigeria’s parliament representing the Michika area, told Morning Star News, noting that the army killed several attackers.

“We thank God for their lives, but the only civilian casualty is the missing pastor whose whereabouts are still unknown.”

Para-Mallam believes Andimi was deliberately targeted. Well-known in the area, the pastor was also the EYN district leader and the regional representative of the Christian Association of Nigeria (CAN).

“To annihilate the Christian faith, there is no better way than to eliminate its prime movers,” said Para-Mallam. “It is also Boko Haram giving a signal that they are not degraded like the government says, and can still strike.”

Andimi followed hostage video protocol and appealed to denominational leadership and the Adamawa governor to intervene for his release.

But showing none of the usual signs of desperation, the pastor made clear his hope lies elsewhere.

“I believe that he who made them to act in such a way is still alive, and will make all arrangements,” Andimi said.

“I have never been discouraged, because all conditions that one finds himself is in the hands of God—God who made them to take care of me and to leave me with my life.”

Samson Ayokunle, president of CAN, issued a statement four days after Andimi’s abduction, urging the Nigerian government to take the necessary steps to rescue the EYN pastor and all other captives held by Islamist terrorists.

And prior to the ISWAP executions, CAN endorsed the US State Department placing Nigeria on a “Special Watch List” of governments that have engaged in or tolerated severe violations of religious freedom.

“If criminals are invading the Christian communities, killing and abducting unchallenged, what do we call it if it is not persecution?” stated CAN in reference to Andimi, noting the subsequent abduction of an additional 41 Christians from the north-central state of Kaduna.

And the next day, following criticism from the Nigerian government that the Christian umbrella group was politicizing religion, CAN reiterated its position.

“Let the government wake up to its responsibilities and see if we will not stop talking about its failure to protect our members,” CAN stated.

Nigeria ranked No. 12 on Open Doors’s 2019 World Watch List of the 50 countries where Christians suffer the most persecution.

“This is not just a religious issue, it is social justice,” said Para-Mallam, referring also to the nearly two-year captivity of Leah Sharibu, a teenage girl whose perseverance despite persecution has also inspired many Nigerian Christians.

Last March, the Nigerian government negotiated the freedom of 104 Dapchi school girls, though ISWAP held back Sharibu because she refused to recant her Christianity.

“The government must do more to get her out,” said Para-Mallam, who with Ayokunle is critical that the teenager was left behind.

“We don’t want promises, we want her free.”

“Our God who delivered the people of Israel from the Egyptian bondage will surely deliver them,” said Ayokunle in his original statement for CAN. “They will not die in captivity, in Jesus’ name.”

There is hope for Andimi, said Para-Mallam, because Boko Haram has released Christians in the past. However, ISWAP has shown mercy only to Muslim captives.

But until then, the EYN pastor continues his witness.

“Andimi lives in the light of eternity, which is a sign of his courage,” said Para-Mallam.