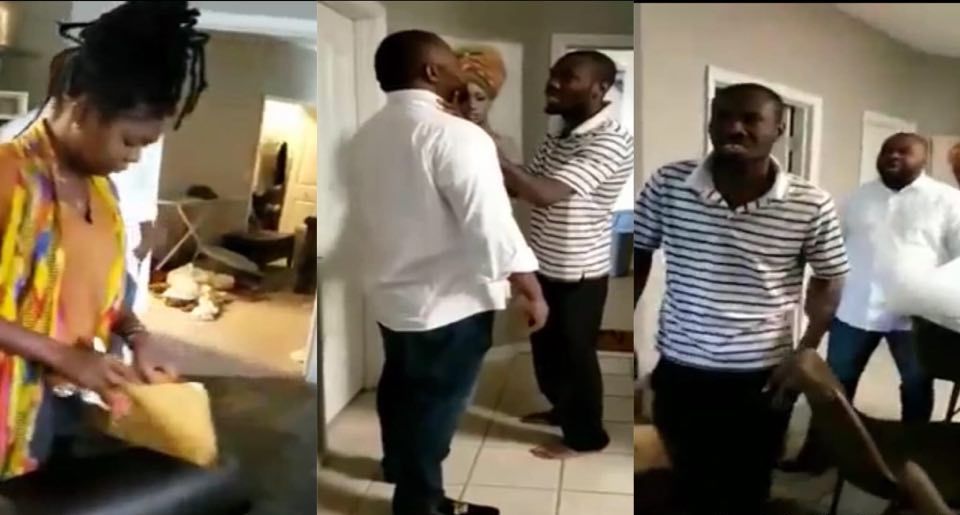 A video has surfaced online showing the moment Pastor Sylvester Ofori threatened to kill his wife, Barbara Tommey before he finally murdered her.

Sylvester Ofori is a 35-year-old Ghanaian US-based pastor and the founder of Floodgates of Heaven International Ministries in Orlando, Florida.

It was gathered that the late Barbara’s family including her brother, Perry, and her sister had accompanied her to her estranged husband’s home to pick up some documents.

However, what was supposed to be peaceful quickly turned violent when Pastor Ofori attacked Barbara in the presence of her siblings.

In the video, Barbara’s enraged brother, Perry, stepped in and restrained Ofori from doing any more harm to his sister.

“I came in here and I told you to sit back. I told you we are not here to argue with you, why did you f**ken attack her?” Perry quizzed.

Perry then instructed Ofori to go to the other room and not come out.

“You were the same person who supported me at the wedding, right? Now you’re here to support your sister, the same sister who the pastor told you that, she was a witch, am I right?”

“We don’t know whether you’re a Komfo Anokye or a pastor my friend, get the f*k out of here before I f*k you up. We did not come here for you, don’t let me hurt you,” angry Perry told his brother-in-law.

When the fight got worse, Barbara was heard begging her brother to stop beating her husband.

Perry further accused his brother-in-law of being a fake man of God.

Upon being freed after being pinned to the ground by his estranged wife’s brother, Pastor Ofori responded saying

“If I don’t kill your sister then I am fake.”

After his threats, Barbara’s senior brother took to his phone to lodge a complaint with the police but Barbara stopped him. She begged his brother not to call the police as it might get Pastor Ofori into serious trouble because he doesn’t have a US citizenship.

After the threats, Perry then advised his sister to call the cops and file a complaint, but Barbara declined and pleaded with her brother to stop those comments because she did not want things to escalate.

“Call the cops. We don’t play with threats like this,” Perry insisted, explaining to his sister that if her husband, who is a pastor, had threatened to kill her, then there is no time to waste.

Unfortunately, a few days later, Pastor Ofori carried out his threat when he shot multiple times and killed her in front of her place of work.

MORE READING!  Man, 67, rescued after he jumped into Kwara river

Policeman Accused Of Murdering George Floyd To Appear In Court