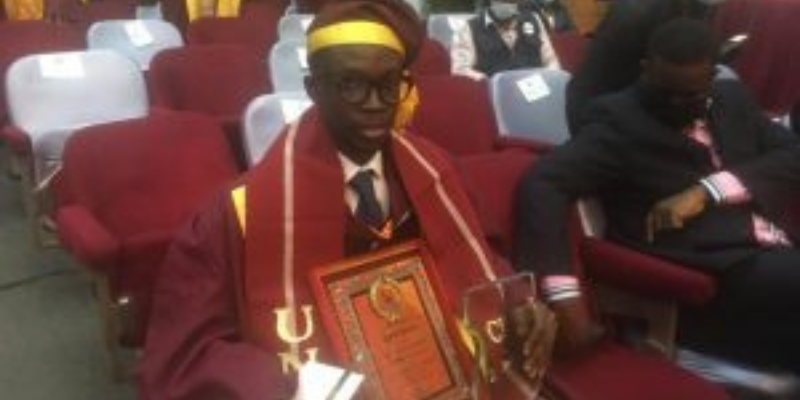 University of Lagos overall best graduating student (Class of 2019), Ibrahim Alimi, has identified passion and hard work as the key attributes to his success in the institution.

Alimi bagged B.Sc in Mechanical Engineering with a Cumulative Grade Point Average of 4.98.

He spoke on Wednesday in Lagos, shortly after he was presented with the awards on day two of the 51st convocation ceremony (2019).

According to him, just like peaks and valleys, there are always several up and down moments.

”My five years stay in this university has been a memorable one, and it will forever be something to always talk about.

”Coming into the university, a timid, small and beardless kid with no friends, no mentor, just random acquaintances, it did not take long till it dawned on me that I was away from my comfort zone.

”Expectedly, it was never going to be a smooth run.

“But, however, as the saying goes, the end justifies the means. Our perseverance and hard work had indeed pushed us this far.

”Speaking the minds of my fellow graduands, the university environment has helped develop our hard and soft skills, with the opportunities provided, the amazing tutelage from our teachers, numerous volunteer activities, clubs and societies.

”I am no more the same person I was seven years ago.

“I am, therefore, using this medium to acknowledge the impact of the school management and lecturers, for a job well done in this regard,” Alimi said.

He urged undergraduates in the institution to always believe in themselves, adding that with hard work and determination, they would sail through.

”I want them to know that the journey may look rough and things may not always go as planned, but what do you do when life gives you lemons? You make lemonades out of it.

”The race is not over until it is over,” he said.

Earlier, Vice-Chancellor of the university, Prof. Oluwatoyin Ogundipe, said a total of 15,753 students would be graduating during the 2021 ceremony, comprising of 7,754 first degrees and 7,999 Postgraduate degrees.

Ogundipe said that the day two ceremony would witness the award of degrees, certificates and prizes to graduating students of the Faculties of Basic Medical Sciences, Clinical Sciences, Dental Sciences, Engineering, and Law.

Others are Management Sciences, Pharmacy and Distance Learning Institute.

He said that in line with one of his six points agenda for the institution, Uncompromising Academic Standards and Excellent Research Output, the university had leveraged the excellence of the staff.

Ogundipe said that this was achieved by assisting them to pay more attention to research and innovation.

He said that the development had resulted in a large number of members of staff having to attract more than N14 billion in research grants since 2018.

Also, the Pro-Chancellor of the university, Dr Lanre Tejuoso, expressed optimism that the graduating students already had what it takes to compete with their peers in other climes, based on hard work.

Tejuoso said that already, he had established an agenda which was; One Seed for three Seeds, meaning teamwork to make UNILAG truly a 21st-century university.

Tejuoso, also the Chairman, Governing Council of the institution, urged the graduands to use their skills toward nation-building and accelerated development, in a bid to make life different,” he said.