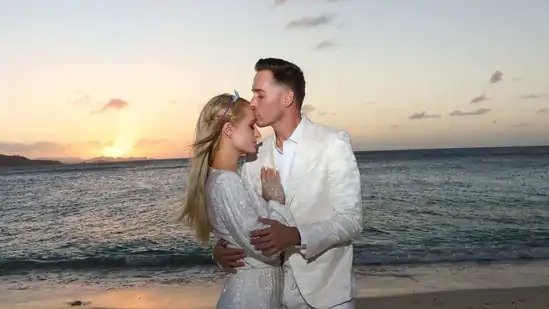 American socialite and actress, Paris Hilton has revealed that she will be taking the last name of her fiance, Carter Reum after marriage.

The lovebirds got engaged this month during her 40th birthday as her fiance took her on a trip for a joint birthday celebration.

The singer opened up on her engagement with Carter on the first episode of her podcast This Is Paris which was released on Monday, February 20.

The 40-year-old revealed that she expected the proposal way before that, during a previous anniversary trip on an island.

“I was very surprised. I was hoping it would happen because it was such an amazing place,” she said.  “It was just so romantic. He had this boat take us to a little private island, and there was this gorgeous dinner setup and it looked like something out of a wedding …  I’m just like expecting” him to propose but it didn’t happen.

At the end of the dinner,  dessert came” and she was hoping “there’s gone be like a ring inside the cake… and it didn’t happen.”

Although she revealed that she “was a little bummed,” Hilton expected Reum to pop the question on their birthday trip and she guessed right.

Reum proposed to her at a “really romantic beautiful tropical paradise,” she said. “We walked down to the beach Randall of a sudden he got down on one knee and started saying this whole speech. It was really sweet and I just started shaking and crying cos I was so excited and so happy” she added as she accepted the shinning $2million (£1.4m) engagement ring.

The Bottoms Up star revealed that she “can’t wait” to be a mum after their wedding and would be taking his last name.

“It’s something we’ve talked about a lot ever since we’ve been together. First the wedding then the babies,” she added revealing that she knew he was the one from their first kiss.

“I’m going to take it(his last name), but I feel like a hyphenated thing like Paris Hilton-Reum, because my name is just my name. I like it,” she said.

14th Headies: The making of a new star, Fireboy DML