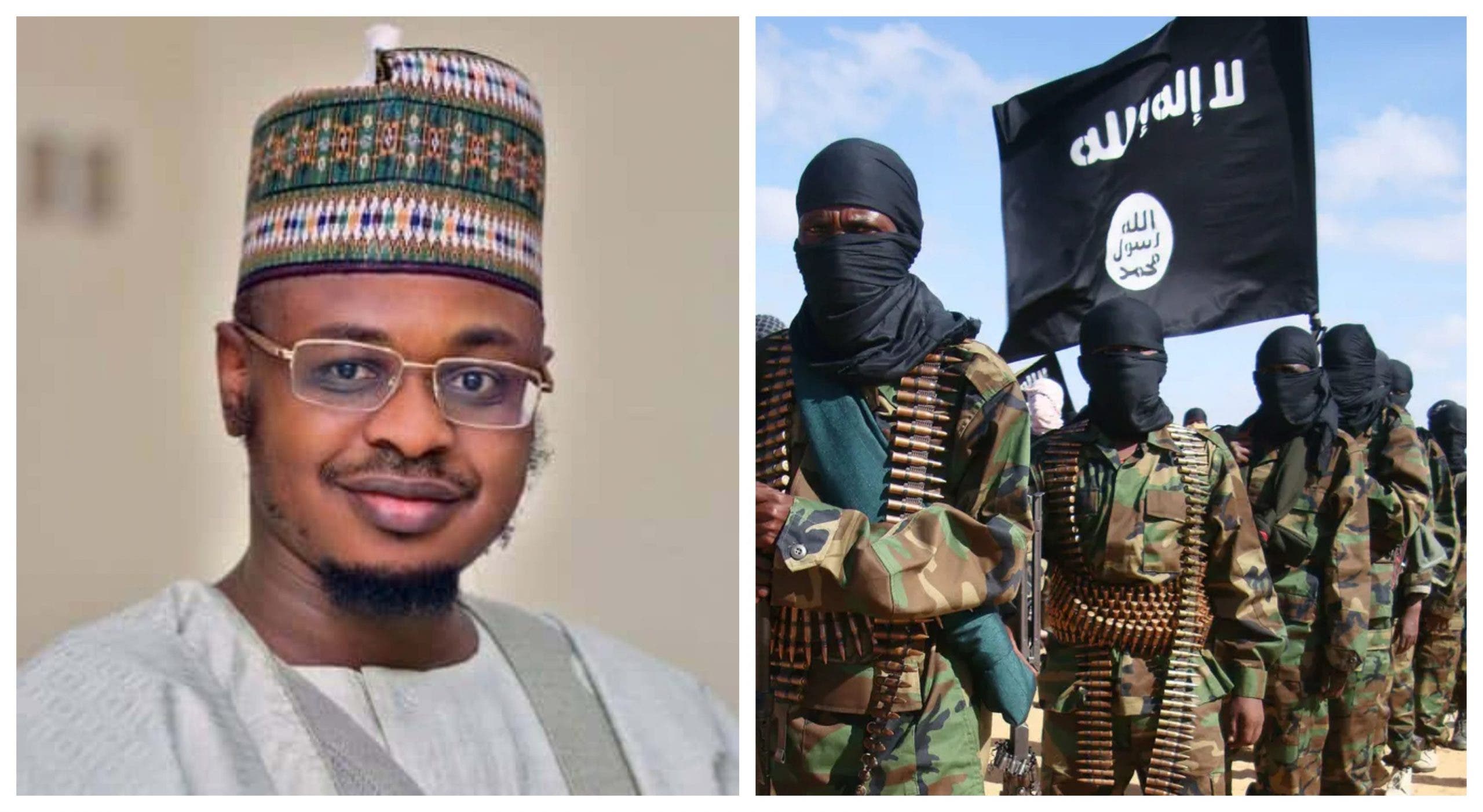 Nigerians have flooded popular microblogging site, Twitter, with demands for the resignation of Minister of Communications and Digital Economy, Isa Pantami.

This comes after a report from Peoples Gazette and Sahara Reporters quoted the minister declaring support for global terrorist groups, Taliban and Al-Qaeda.

Recall that Pantami had recently denounced and threatened to sue some media platforms for reporting that he is on the U.S. terror watchlist for supporting Boko Haram.

However, in a 2019 academic document attributed to the minister titled ‘Debating Boko Haram’, shared by The Gazette, according to SR, Pantami was quoted saying “this jihad is an obligation for every single believer, especially in Nigeria (hādhā jihād farḍ ‘ayn ‘ala kull Muslim wa-khuṣūṣan fī Nījīriyā),”

The 20-minutes long speech was reportedly concluded with the prayer, “Oh God, give victory to the Taliban and to al-Qaeda (Allahumma’ nṣur Ṭālibān wa-tanẓīm alQā‘ida).”

According to PG, Pantami’s research comments were published by top journal publisher academia.edu in March 2019, several months before his ministerial appointment by the President, Major General Muhammadu Buhari (retd), on August 21, 2019.

Reports revealed that the comments were translated by Professor Andrea Brigaglia, an African expert at Naples University in Italy. Nigerian scholar, Musa Ibrahim of the University of Florida in the United States, contributed to the paper that explored the onset of Boko Haram in Nigeria.

In a second speech, delivered in 2006, Pantami reportedly offered his public condolences for the death of the leader of Al-Qaeda in Iraq, al-Zarqawi.

“May God have mercy on Aḥmad alFāḍil al-Khalayleh, raḥmatullāh’ alayhi. May God forgive his mistakes. He is a human being. He has certainly made some mistakes in front of God, so may God forgive his mistakes. Who am I talking about? He is Abū Muṣ‘ab al-Zarqāwī… It was the Commander of the Faithful (Amīr almu’minīn) Mollah Omar ‒ may God preserve him ‒ who personally gave him the authority to run this camp.”

Meanwhile, Peoples Gazette reported that the minister refused to comment regarding his support for the terrorist groups when contacted.

It also quoted Pantami as saying, “We are all happy whenever unbelievers are being killed… but the Sharia does not allow us to kill them without a reason.”

The news outfit also shared a video of Pantami expressing his utter rejection of public service and condemning his colleagues who took public appointments, vowing never to join them.

He condemned his colleagues who took public appointments and vowed never to join them.

President Buhari ignored this and other views of Mr Pantami’s and put him in charge of Nigeria’s crucial telecoms infrastructure. pic.twitter.com/EKXksWkgqG

The publication has however caused an outrage on Twitter as Nigerians demand the immediate resignation of the minister with the ‘#PantamiResign’ hashtag the top trending topic in Nigeria with thousands of tweets.

@mrflairr wrote: “Whether Nigeria is a serious country or not, we are calling for the resignation of Pantami immediately… Just as you calling for the resignation of Pantami #PantamiResign, please also ask God to punish Emefiele, these fiends have turned Nigeria upside down. We are operating a voodoo economy, every single item is hitting the roof in price.”

Meanwhile, popular journalist, Abdulaziz Abdulaziz with the username @Abdulfagge, opined that Pantami should not be judge with his past, though he admitted that “public officers deserve all the scrutiny. But while we’re at it we’ve to be thorough, fair & nuanced. Yes, we can dig the past but passing judgment would have to alongside context and current realities. A lot of people have had a severed past.”

Abdulaziz, the Premium Times reporter credited for reporting the alleged NYSC certificate forgery of former Finance Minister of Nigeria Kemi Adeosun, leading to her immediate resignation added that “We all have a past. Not everyone will escape if our past actions and speeches are used against our present positions. Opinions and stands do change in the face of new knowledge or facts, or even maturity. And being progressive, other than dogmatic is whole mark of great minds.”

One user, @Oluwapelumi_SA, opined that it’s dangerous for someone of Pantami’s position to declare support for global extremists.

“When I saw Dr. Patami’s declaration of support for Al-Qaeda, Taliban and Jihad. My mind went straight to the recent air strikes and several other ambushes against the military. It is far more dangerous for Minister of Communication to declare such support,” he said.

@MFaarees_ countered the position by saying that “Another bunch of (clowns) is trending #PantamiResign this morning, I don’t know why they’re so obsessed with Sheikh Pantami, is it because of the NIN-SIM linkage.?? why bother if you’re not a Yahoo Boy.?? Pantami isn’t going anywhere, and you must link your SIM with your NIN!”

“I will not join you people and have that “it was in the past” conversation, because it’s same as arguing “if a repented Boko Haram member can become a minister?” Terrorism is not a drinking habit you drop in the past; Pantami should resign immediately” another user, @chosensomto wrote.

However, @musty0 also feels that the past should be left buried by tweeting, “Anyone would have supported Alqaeda at it initial stage, US also funded them at some point. They were actually created to fight the Soviet Union in Afghanistan. They turned criminals and people withdrew their support especially after the 911 attack. Leave the past in the past.”

Another user, @MayUbeku said that Pantami’s alleged Jihadist link is a threat to Nigeria and Nigerians won’t be bribed with the suspension of the ban on SIM card registration after four months.

He wrote: “Small fire on Pantami, he wants to bribe us with SIMs registration. Naah. We want you to resign. Your action on compulsory NIN during the peak of the pandemic made many citizens contract COVID and your Jihadist affiliation is a threat to Nigeria as a secular state.”

However, @bravefacefunkie opined that the report was a mere attack on Pantami, accusing the media of being the mastermind, she wrote: “Notice the coordinated attacks on the person/office of @DrIsaPantami? That’s how they mark anyone per time for demolition. Their regular news media play the advance role, then the horde follows with smear campaign like this #PantamiResign. In all, TRUTH will always prevail!”

@Ugonna37489321 opined that Pantami’s resignation is a preventive measure to kill the founder of al-Qaeda, Osama Bin Laden.

He wrote, “Pantami having access to NIN of all Nigerian citizens is the same thing as Osama bin ladin having access to our homes especially the kitchen…..pantami resignation is not an attack to the arewa people it’s a preventive measure to kill Osama bin Laden again.”

This is just as @Princewildonald tweeted that “#PantamiResign is a ludicrous subject on the trend list. You and I both know that no amount of tweets can bend the will of this ruthless government, even if Pantami were guilty of the allegations. This is Nigeria, not the USA.”