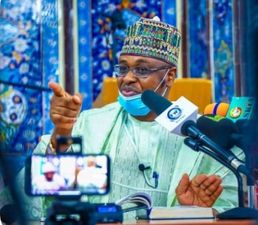 Bishop Charles Ighele, the Chairman of the Financial Accountability Council of the Pentecostal Fellowship of Nigeria (PFN), has urged underfire Minister of Communications and Digital Economy, Isa Pantami, to honourably resign from his position.

The Minister has been under the heat since the revelation of his past support for international terrorist groups, al-Qaeda and Taliban.

The revelation has led to a widespread call for his resignation or sack from Nigerians even up to the legislative arm as well as from past government officials, including opposition party members.

But despite the outrage, the Special Adviser to the President on Media and Publicity, Garba Shehu, told Nigerians that it wasn’t bothered about Pantami’s past pro-extremist comments, adding that the revelation “is merely the instrument they are using to attempt to ‘cancel’ him.”

“The administration stands behind Minister Pantami and all Nigerian citizens to ensure they receive fair treatment, fair prices, and fair protection in ICT services,” Shehu added.

While curtains haven’t been dropped on the matter, the PFN chair warned Pantami that he would lose his honour locally and internationally if he doesn’t do the needful like former Minister of Finance, Kemi Adeosun.

Although many have made reference to Adeosun’s resignation over an alleged forgery of her National Youth Service Corps certificate, the presidency, through Shehu, when he appeared on Channels Television’s ‘Politics Today’ programme on Friday, April 21, said the crime of alleged certificate forgery involving Adeosun is different from the extremist views of Pantami.

However, the clergyman in his statement, according to The PUNCH, warned the Nigerian government to deeply investigate the facts about the minister’s extremists affiliation.

He said, “The Federal Government should not treat the issue with kid gloves, they should dig deeper and establish the fact surrounding the Minister’s alleged romance with terror groups before his appointment to office. “Government needs to get more information from international community.

“The issues involved here are so serious that you are never going to convince the United States, Britain and other international community that you are fighting terrorism.

“It is very possible that he has repented of that extra Islamic attitude. But many people might not be convinced that he has repented. Ditto for security agencies and the international community. They might think that he wants to remain in office, that’s why he said what he has said so far.

“For the sake of the nation and citizens, the Minister should step aside. There are things that for the sake of the society and nation you forego. So, the Federal Government may believe him but the international community won’t. I think it is more honourable for Pantami, a Muslim cleric himself, to resign, as a token of his remorse for what he said years before.

“The minister should take a cue from the former Minister of Finance, Kemi Adeosun, who honourably resigned when the occasion was loudest.

There are times that public opinion is powerful but all I know is that what will give him honour is to resign. But if he chooses to remain in office and his tenure expires, he has lost the honour forever and the international community will not respect him too. So, he has to choose between the office that may not last between now and two years or resign now and gain honour forever. If I should counsel him, I’ll ask him to resign.”