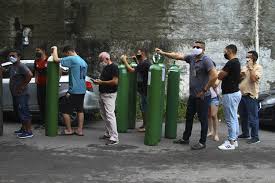 Lorries loaded with oxygen cylinders have arrived in the Brazilian city of Manaus from Venezuela after the healthcare system in the city became overwhelmed by Coronavirus cases.

The convoy transported more than 100,000 cubic metres of oxygen, which will meet demand for one and a half days.

Venezuela’s government had announced the delivery after hospitals in Manaus ran out of oxygen due to a huge increase in COVID-19 patients.

The lorries travelled from the city of Puerto Ordaz, some 1,500 kilometres from Manaus.

Bolsonaro said he would accept the oxygen from Maduro nonetheless.

Venezuela is suffering from a severe economic and supply crisis.

Millions of Venezuelans have fled the country due to shortages of daily goods.