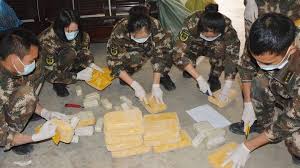 Two suspects were arrested with more than 70 kilogrammes of drugs seized from a drug trafficking case in southwest China’s Guizhou Province, according to the local police on Tuesday.

After receiving a tip-off in December 2020 that a man, surnamed Cheng, was planning to transport drugs via Qixingguan District in the city of Bijie, the Police in Guizhou set up a task force to investigate.

The two suspects, including Cheng, were caught by the Police on Jan. 6 with 101 bags of methamphetamine seized on the spot, totalling 70.16 kg.

The suspects are now in police custody and further investigation into the case is underway.