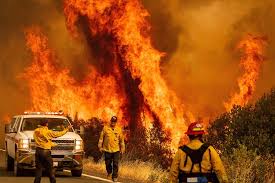 More than 14,000 firefighters continue to battle over two dozen major fires – including two of the largest in California history – which have destroyed more than 1,200 homes and structures.

More than13,000 lightning strikes combined with extreme summer heat caused many of the fires throughout the state, which have led to seven deaths and tens of thousands of people forced to leave their homes.

Firefighters have made progress in the two largest burn areas, the SCU Complex and the LNU Complex, which comprise multiple fires in counties around San Francisco, but the blazes are still largely uncontained and have burned over 282,065 hectares.

In the San Francisco area authorities are telling residents to stay indoors due to poor air quality.

Commission for persons with disabilities gets governing council