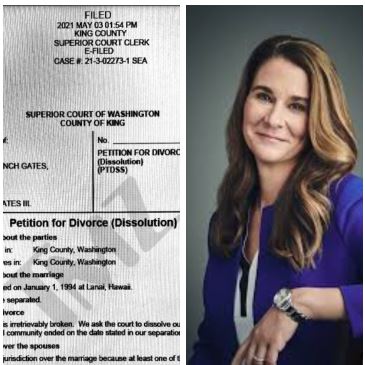 Melinda, wife of Bill Gates, on Monday filed a divorce petition asking the Superior Court of Washington to dissolve their 27-year union over claims that it is irredeemable.

The document also mandated the judge to rule that the marriage ended “as of the date in the separation contract.”

TMZ reported that although the contract was not included in the divorce file, the couple apparently separated at some point earlier and signed a document to that effect.

“This marriage is irretrievably broken. We ask the court to dissolve our marriage and find that our marital community ended on the date stated in our separation contract,” the divorce document read.

Recall that the Gates released a joint statement on Monday announcing that they have resolved to quit the marriage.

The union has produced three incredible children and solidified a charitable foundation that helps people across the world to lead healthy and productive lives.

The joint statement which was posted on their individual Twitter accounts read, “We continue to share a belief in that mission and will continue our work together at the foundation, but we no longer believe we can grow together as a couple in the next phase of our lives.”

The co-founder of Microsoft started dating Melinda in 1987 after the lovebirds met at a trade fair in New York. The relationship blossomed and ended in marriage held at a private ceremony held in Lanai, Hawaii in 1994.

Bill is currently ranked fourth richest man, according to Forbes, with an estimated net worth of $124 billion, which grew from $98 billion in 2020.

Related Topics:Melinda Gates states in divorce petitionOur marriage is irretrievably broken
Up Next