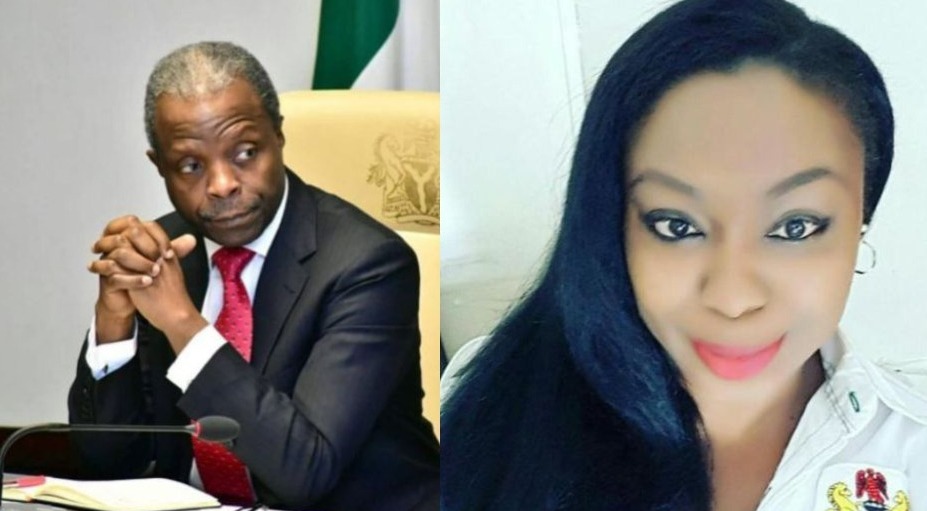 A Nigerian lady, Bolouere Opukiri, who was fired twice, in 2017 and 2018, as a staff at the Presidential Amnesty Office after criticising Vice President Yemi Osinbajo on social media, has mocked the aides of the VP sacked by President Muhammadu Buhari.

Opukiri, in a July 5, 2017 tweet, had described then-Acting President Osinbajo as ‘a novice’ for travelling out of the country at a time Buhari was receiving medical treatment in London.

In another tweet five days later, she criticised the First Lady Aisha Buhari over her comment about some ‘hyenas’ and ‘jackals’ controlling her husband’s government.

Screenshots of the two tweets were taken and subsequently sent to the presidency by some social media users believed to be Osinbajo’s aides and supporters of the All Progressives Congress (APC).

Osinbajo’s spokesperson, Laolu Akande, was said to have received the complaints and forwarded them to the then-head of the amnesty office, Paul Boroh.

MORE READING!  PHOTO: Father shades son who compared him to Otedola, says I wish Wizkid was my only son

In an e-mail seen by PREMIUM TIMES, the petitioners had called for her dismissal and said:

“If characters like Ms Opukiri continue to work in government, it would portray the administration’s online supporters as weak and their loyalty unrewarding.”

Opukiri was fired after facing a six-man disciplinary committee.

About a year after her dismissal, Opukiri was re-employed in May 2018 by a new outsourcing firm contracted by the amnesty office, but she was asked to stop work within the first week.

She claimed some aides of Osinbajo had told the new head of the amnesty office, Charles Dokubo, to dismiss her and he had to bow to their pressure “to avoid offending the presidency”.

Following reports that 35 aides of the vice president have been fired by Buhari, Opukiri took to Twitter to shade the sacked aides, some of whom she said were responsible for her dismissal in 2017.

Her jibes were prompted by tweets from some social media users who trolled the sacked aides and recounted how they reported several critics of government to their employers and blocked others from having business dealings with government agencies.

If I remember vividly, some Osibanjo aides got Bolux sacked for criticizing Akande?? They were rejoicing pon TL that they got someone sacked sef.”

some of the sacked osinbajo aides actually got people sacked, victimized people in the tech space that spoke against govt etc. the most stupid set of youth. Like it’s a permanent gig. It’s sad.

In her response to one of the tweets, Opubiri wrote:

“I swear haven’t said anything about this cos I have a personal policy of not explaining my real life on Twitter.

“That story ran a year after the act when they blocked my second contract. Aisha Buhari’s aides didn’t want it to run and tried to reinstate me. Osinbajo FC said no.”

It was so bad that my boss will go to the villa for meetings and they’d corner the man to ask if i was still at the office. Over a quoted tweet on a opinion that was in the media. I’m not a card carrying member of any party or a civil or public servant oh. Wild. 2./ https://t.co/8qtBUACAF4

“Heard VP is holding all the sack letters and waiting for Buhari to return so he can report Abba Kyari and undo the matter. He better put it on the TL and tag Segalink let’s RT to find helper because he’s on a long thing.”

The incident traumatized me for years, RRS commander recounts invasion to cultist’s home