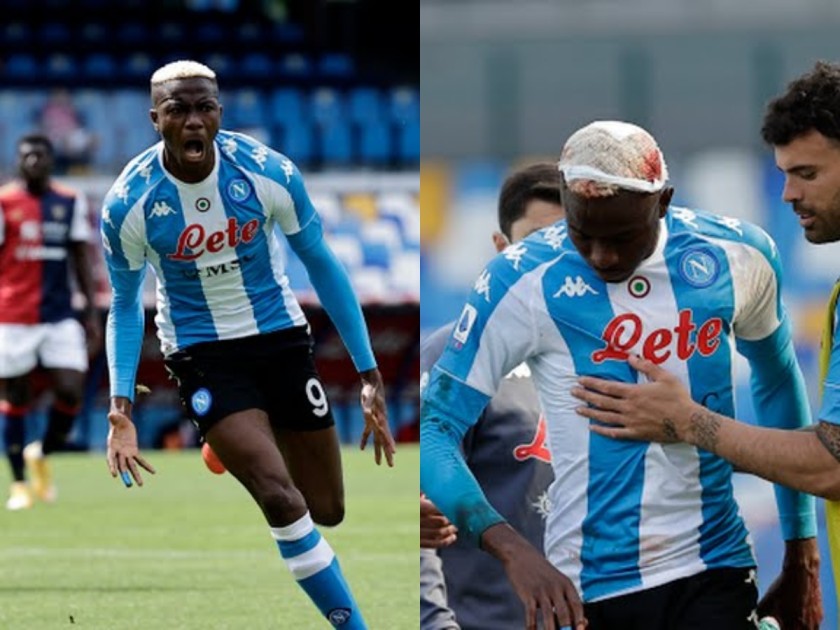 Super Eagles forward, Victor Osmhen, suffered a head injury despite netting Napoli’s goal in the 1-1 draw against Cagliari on Sunday.

Osimhen, who had endured a rough start to life in Naples, is gradually getting back to the form that saw the Italian side cough out 70 million euros for the Nigerian international, making him the most expensive African player.

Osimhen showed not only speed but also technique after a soft assist from Lorenzo Insigne, to bag his third consecutive goal in 3 games, making it 1-0 in the 13th minute.

The Nigerian however suffered a head injury after a clash with Cagliari’s Luca Ceppitelli down as both players fell down injured.

Osimhen was however left with a bandage on his head before he was subbed in the 76th minute for Belgian star, Dries Mertens.

The Azzurri were ever pegged back in the 94th minute as Cagliari stole a point from Gennaro Gattuso’s men.

Although Napoli suffered a little setback in their pursuit for a Champions League spot, the result is the third consecutive useful result and also the 26th point in the last 12 games.

Meanwhile, in 35 meetings with Cagliari, Napoli have secured 20 wins, while Cagliari have bagged 5 wins, leaving both sides with 10 draws.