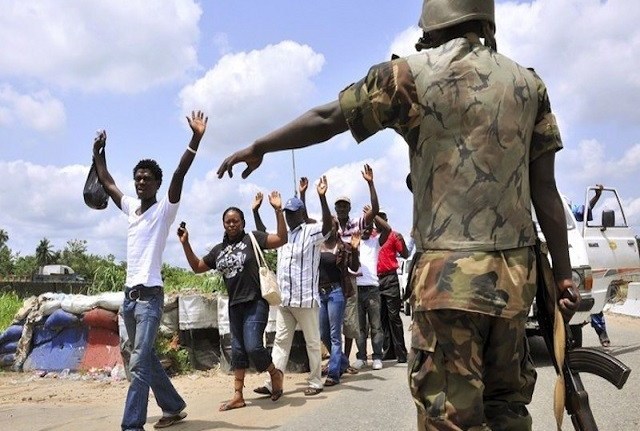 Plan by the Nigerian Army to begin a nationwide operation to demand identity cards from citizens across the country has sparked criticisms from Nigerians on social media.

The operation, which would commence nationwide in November after its success in North East, is named ‘Operation Positive Identification’

In a statement issued in September by the military, soldiers would accost citizens on the streets or highways and ask them to produce means of identification on the spot.

The advisory also advised citizens to:

“Be cautious and avoid night travelling if possible.

“Do not carry prohibited or illegal items/substance.

The part of the advisory asking citizens to ‘Dress Responsibly’ has irked social media users who have taken to Twitter to condemn the planned operation.

Some social media users wondered how the dressing of citizens contributes to the development of the country.

“Why does the military want to identify citizens?” a Twitter user, Ada Campbell asked.

“What is the army’s business with everyday people? I really want to understand.”

It gets more ridiculous. What does dress responsibly mean? Has Nigeria turned into a police state? Are we now under martial law?
What does the senate have to say about OPI? pic.twitter.com/jjEvhxZiYy

We are back to War Against Indiscipline (WAI) and it will surely infringe on fundamental human rights. How do you explain routine movement of citizens; and what determines a dressing that’s responsible? This directive is an attempt to silence us and we must rise against it. pic.twitter.com/QjbOIzpmHg

They should just release a uniform we all can wear, after all our universities are already forcing grown people to wear uniform to class. Dress responsibly my ass

I really hope this is a joke!!!

Hehehehehehe, the last item on the list says “Dress Responsibly”

Honestly this must be some type of joke pic.twitter.com/P6QmNBg6Bu

For so many days I’ve been talking about having a Nigerian version of US’ posse commitatus act. The military should not be allowed to treat citizens like this.

No government should tell its citizens to dress responsibly. pic.twitter.com/aAlR8VG308

“dress responsibly”
This country is hell on its own.
RIP in advance to the lives that’d lost, cos it’s inevitable. pic.twitter.com/cfzre5NGHN

Guys and ladies, abeg dress responsibly from Nov 1..Cause it’s soldiers that’ll be on our roads o. And there’s nothing like I know my rights with them. It’s the federal government that gave the ‘dress responsibly’ order.. Make soldiers no flog you ooo.

We have all been advised by the Federal Government to dress responsibly. Can they release dress code so we can all be uniformly dressed as a nation?

You see that “dress responsibly” part ? Soldiers are going to cut some of you dreadlocks, Afros and beards. pic.twitter.com/GeYlTRYApy

It gets more ridiculous. What does dress responsibly mean? Has Nigeria turned into a police state? Are we now under martial law?
What does the senate have to say about OPI? pic.twitter.com/jjEvhxZiYy

“Dress Responsibly”. This means there might not be fuel scarcity this year. I’ll wager that this operation won’t be in towns and neighborhoods where banditry and terrorism is rampant. Let’s watch and see. pic.twitter.com/UiwhdfrFxZ