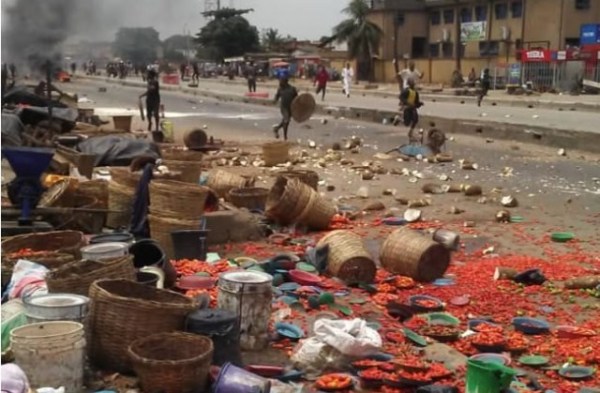 One person was confirmed dead on Friday as a result of a misunderstanding between a cobbler and a cart pusher in the Shasa market area in Ibadan, Oyo State.

It was reported that the clash erupted on Thursday but reached its peak on Friday when the cobbler was confirmed dead as a result of an injury sustained during the clash.

An eyewitness told NAN that the cart pusher, from the northern part of the country, stabbed the cobbler, a Yoruba, with a knife as a result of a misunderstanding between the two.

The witness said that the cobbler was rushed to the hospital for treatment and later confirmed dead on Friday morning.

He said that the situation sparked trouble as traders and some other residents of the area stormed the Shasa market on Friday, to retaliate the death of their colleague.

When NAN visited the area, it was discovered that some shops and houses were burnt while the market was deserted.

Security operatives, including the Police, the state Joint Anti-Crime security patrol team Codenamed Operation Burst and Amotekun operatives, were seen at different locations to ensure that normalcy returns in the area.

The Police Public Relations Officer in the state, CSP Olugbenga Fadeyi, confirmed the incident in an interview with NAN on Friday, in Ibadan.

Fadeyi said that the violence erupted as a result of a minor misunderstanding between two persons which later resulted in the death of one of them.

“The Commissioner of Police, Ngozi Onadako, and Gov. Seyi Makinde’s aide have been to the place to talk to the aggrieved parties.