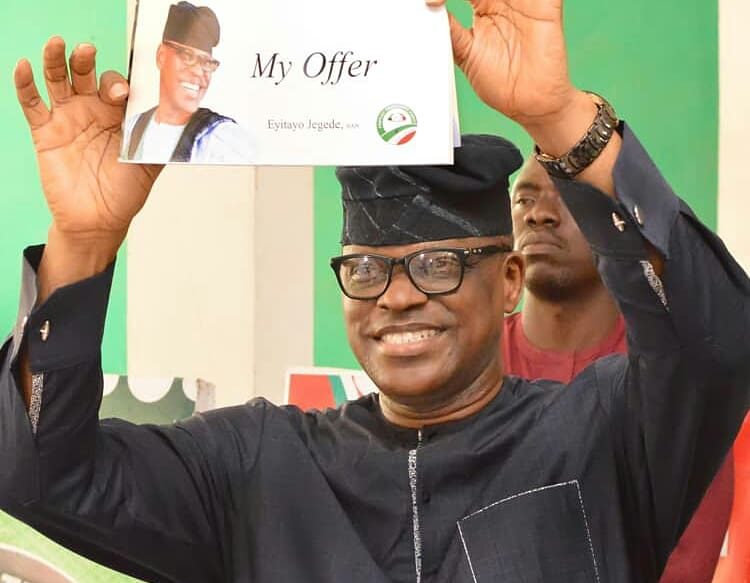 Jegede, who is also a Senior Advocate of Nigeria (SAN), made this known on Thursday during a visit to the Olukare, Oba Akadiri Momoh, in Akoko North-East local government area of the state.

He said the new formula had become imperative aimed at flattening the curve of the unemployment rate in Ondo State.

Unfolding the agenda, he said, “If you elect us, we will give financial support for the establishment of industries across the state by interested investors.

“However, we will set a condition that they must employ people living in Ondo State that are without jobs.’’

Jegede said that in view of the global economic situation agriculture had become the mainstay of the economy, therefore, his administration would support farmers in commercial agriculture by providing them farm inputs and financial aid.

He said that his party had already laid-out plans to establish agro-allied industries, in cluster formations, to provide a sustainable market for the rural farmers.

The governorship candidate also emphasized that once elected governor he would immediately “crash the unreasonable tuition fees and also provide a conducive learning environment for students and pupils across the state”.

He said further that his administration would restore the policy of free healthcare for pregnant women and nursing mothers.

“I want to assure you that a Mother and Child Health Care Centre will be sited in Ikare if I am elected governor.”

Jegede further promised to revamp the moribund Awara Water Dam Project which, if on stream, has the capacity to supply potable water to most parts of the northern senatorial district and other parts of Ekiti State.

Responding, the Olukare, Oba Momoh, expressed delight at the issue-based campaigns of Jegede and prayed for his success at the polls.

The Newsmen, reports that the governorship polls in Ondo state will hold on Oct. 10.