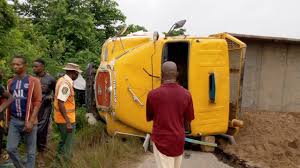 Three persons have reportedly died in a fatal accident along Papa-Ilaro road in Ogun on Wednesday, July 1.

Two other passengers in the road crash were said to have sustained injuries, while two others were rescued unhurt.

According to reports, the incident occurred around 8:25 am at Ajegunle, inward Ilaro.

Two vehicles, a Man-diesel truck and a Toyota Corolla were involved in the crash.

The Ogun State Traffic Compliance and Enforcement (TRACE) Corps has confirmed the incident to reporters.

TRACE image-maker, Babatunde Akinbiyi, told our correspondent that the tipper truck was inbound Papa from Ilaro, while the Toyota Corolla Car was outbound Papa to Ilaro at the time of the ugly incident.