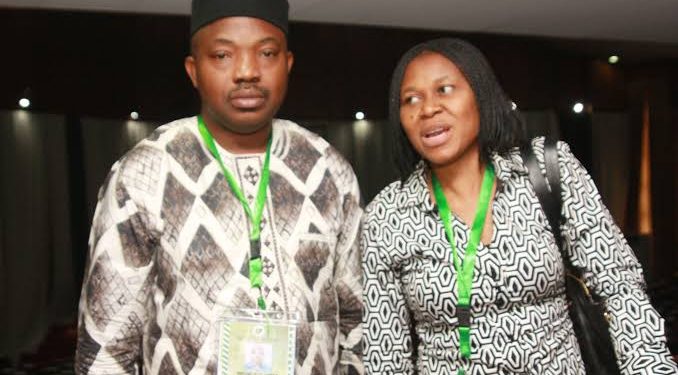 Joe Okei-Odumakin, widow of late Afenifere spokesman, Yinka Odumakin, has disclosed how doctors delayed the announcement of her husband’s death.

Recall that Yinka reportedly died on Saturday due to complications related to COVID-19 at an intensive care unit in Lagos State.

However, in a tribute titled, ‘Yinka: Basking in the shadow that you cast’, released on Tuesday, Joe said that her husband actually died on Friday but the doctors delayed the news because they did not know how to break it to her.

According to her, Yinka Odumakin’s death certificate showed that he died 10.40pm on Friday as against Saturday earlier announced.

Okei-Odumakin, who is also the President of Women Arise, vowed to continue to fight for the ideals of her husband.
“Yinka, it cannot be goodbye, It is goodnight and see you later on the other side with God.

“The medics said they could not fathom how to immediately relay the message of your passage to me directly.

“Now that I am in possession of your death certificate, I can see you passed at exactly 10.40pm on Good Friday (April 2nd, 2021) and not in the morning of Saturday, April 3rd, 2021) as initially communicated.

“Due to the principles of the truth and saying it as it is, which Yinka and I hold dear – and which Yinka lived all his adult life for – it is important to immediately put this very important record straight.

“You came! you saw!! and you conquered!!! We will carry forward the baton in the eternal word of our leader, Nigeria will be saved, Nigeria will be changed and Nigeria will become a great nation. Nigeria will work in my lifetime and even in yours as you live on in me, our children and generation yet unborn,” she said.