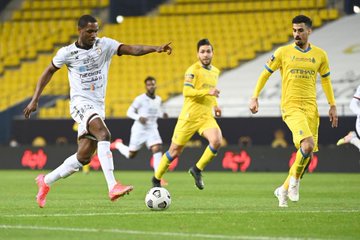 The 32-year-old came on as a 63rd-minute substitute for midfielder, Fábio Martins, with the league leader 2-0 ahead against Al-Nassr after goals from Éver Banega 17′ (P) and Cristian Guanca 28′,  who made it 3-0 in the 82nd minute.

The former Manchester United man announced his arrival with few minutes to the end of the match (90+2′) as Al-Shabab took a four-point lead at the top of the table.

Ighalo joined the Saudi club side during the January transfer on a permanent deal from parent club, Shanghai Shenhua after his United contract expired at the end of January.

He scored 10 goals in 19 appearances for Shanghai Shenhua, helping them to the 2019 Chinese FA Cup.

His dream United move ended with three semifinals and five goals in 23 appearances after arriving at Old Trafford on deadline day in January 2020.

Ighalo was reduced to just four appearances for Ole Gunnar Solskjaer’s side this season following the arrival of Edinson Cavani in October.

The former Watford star who retired from international football in July 2019 netted 16 goals in 35 appearances for Nigeria and helped the Super Eagles to a third-place finish in the 2019 Nations Cup in Egypt registering five goals and one assist.