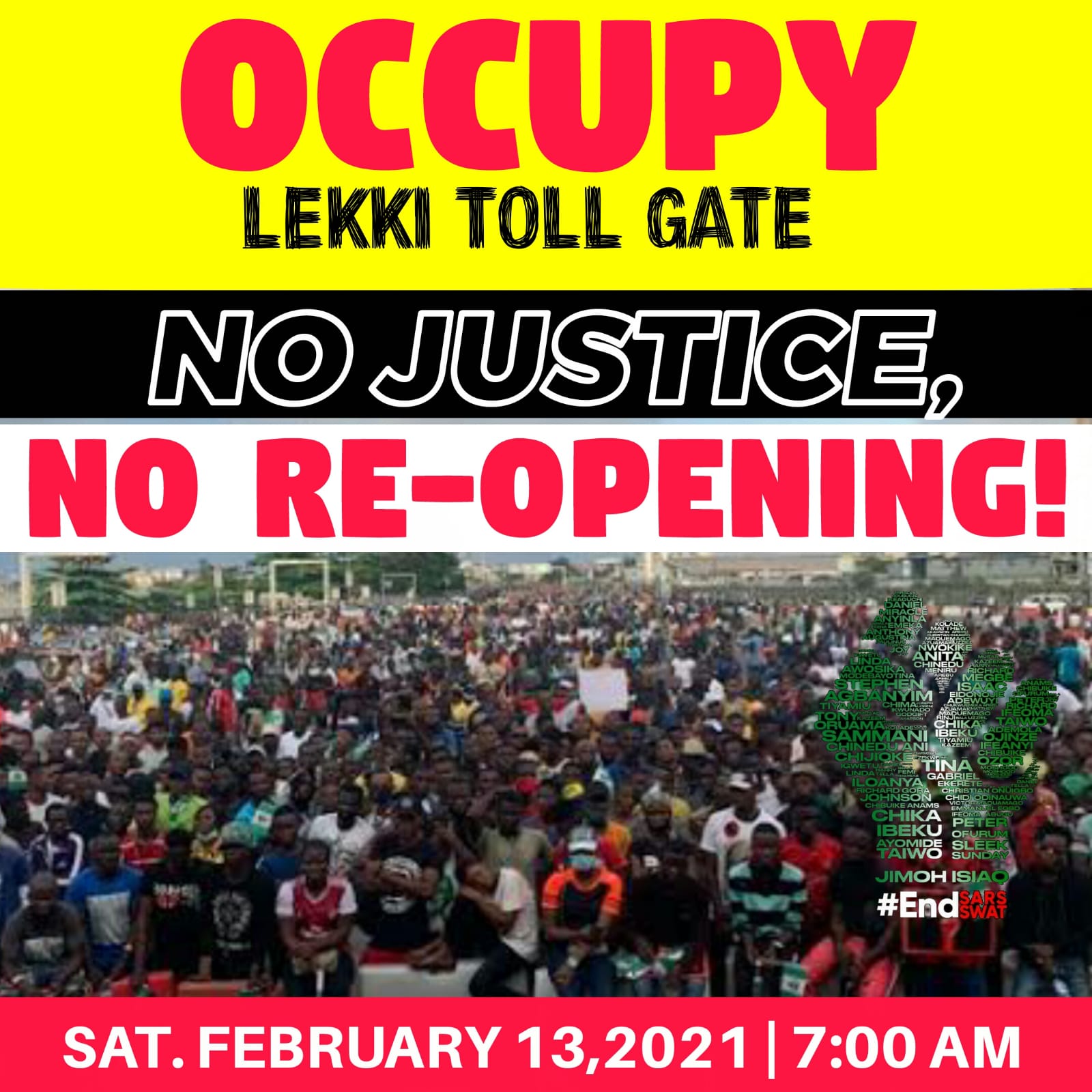 Nigerian youths are about to begin another protest #OccupyLekkiTollGate in Lekki Lagos State after the government is set to reopen the toll gate.

Recall that months ago, precisely October 20, 2020, at least 12 #EndSARS protesters who were calling for an end to police brutality were reportedly killed by soldiers at the toll gate, according to a recent Amnesty International report.

Although the Federal Government has maintained different narratives about the shooting and soldier’s presence which varied from that of the Lagos State Government, one that has since stuck from the FG is that no protester was killed during the attack on harmless protesters over 100 days ago.

While the alleged massacre remains a mystery till date, two days ago, the Judicial Panel of Inquiry set up by the Lagos State government to investigate the October 2020 Lekki shooting incident approved the reopening of the Lekki Tollgate.

Displeased by the directives from the panel to reopen the toll gate, a number of youths have taken to Twitter with #OccupyLekkiTollGate as they plan to stage a protest on Saturday, February 13th, 2020 against the planned reopening of the toll gate.

A number of celebrities, including Nancy Isime, Reno Omkri, have joined the train as Nigeria could yet witness another protest.

#OccupyLekkiTollGate We won’t allow their proxies: the Lekki Concession Company, & the Judicial Panel PAID ACTIVISTS to rewrite history. They can’t silence us#EndSARS will continue to haunt them pic.twitter.com/pMC3wOLdbp

“The only thing necessary for the triumph of evil is for good men and women to do nothing” – Edmund Burke.
I stand firmly with #OccupyLekkiTollGate #nojusticenottoll#EndSARS

Only teamwork can make #OccupyLekkiTollGate work. Let us put our differences aside. We must be emotionally mature enough to work with those who dislike us, to attain a goal that is good for Nigeria. Let us be driven by our love for Nigeria and not our political differences.

We did not inherit the silence of our parents.

May be they don’t understand that our National Anthem said “The Labours of our Hero’s past shall never be in Vain ”#OccupyLekkiTollGate #EndSars Bitcoin Tesla Adamu Garba iPhone 6 pic.twitter.com/Rc2vnmcJdB

After killing our brothers and sisters at Lekki toll gate, these government think they can brainwash us ,we need justice for those heroes that sacrificed there lives at the lekki massacre. No Justice, No Re-Opening of Lekki Toll Gate..
Retweet if u see this#OccupyLekkiTollGate pic.twitter.com/nKeJCqM26Q