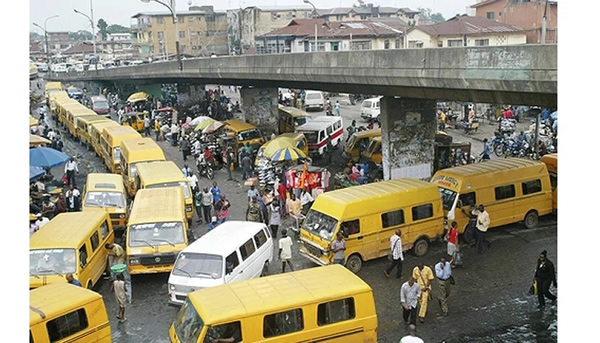 Nigerians on Twitter have blamed the Lagos State Government for legitimising thuggery after the chaos that occurred at the Obalende area of the state.

Obalende became unsafe on Thursday morning as rival factions of the National Union of Road Transport Workers clashed, leaving residents and commuters scrambling to safety after a series of gunshots from the fighters.

The unprecedented occurrence threatened the peace and safety of Lagosians, coming after peaceful and harmless protesters were attacked by thugs and armed soldiers in October 2020, has led to accusations against the government.

Some Twitter users alleged that the government planned the NURTW clash to scare residents planning to embark on the #OccupyLekkiTollGate protest on Saturday against the reopening of the Lekki Toll Gate.

However, others did not resist the urge to blame the government for empowering the thugs by reminding Nigerians how these same thugs were allegedly used by the government to attack peaceful #EndSARS protesters some months ago.

According to popular EndSARS protester, Aisha Yesufu, the government did not realise the consequence of legalising thuggery in the state.

She said, “When government decided to give thuggery legitimacy because it wanted to attack citizens who were simply demanding that they should be allowed to live, government did not realise the consequences of their action especially just after a pandemic induced lockdown. Obalende is!”

Another user, @AyoBankole, lamented the weakness of the police and soldiers in the area against the thugs as he expressed shock at the liberty given to the touts and the attack on peaceful protesters by soldiers as well.

“Obalende has been a hotbed of violence & crime for years. Yet, Police Command HQ is there, infact they call it Lion Building. The Army command HQ there, infact, it was the state house, called Dodan Barracks. Lion Building & Dodan are weak in the face of Tinubu empowered agberos.

Although normalcy has been restored to the area, according to the Lagos State Rapid Response Squad, another Twitter user opined that the officers in the Nigeria Police Area ‘A’ Command in the area, popularly called Lion Building are no different from the police.

“Officers from the Lion Building are agbero in uniform. They coordinate the madness in that hood. What is remitted to them daily, I was told, gets to the head of Lion Building. Nutshell: the agbero you want them to arrest are actually their employers,” the user said.

Another user pointed out that the thugs were empowered by the former governor of Lagos State, Asiwaju Bola Ahmed Tinubu – the National Leader of the ruling All Progressives Party (APC).

“it has been happening for years”… “Tinubu empowered”. These people and their silly obsession with Tinubu. A very narrow-minded way of looking at issues. A topic that ordinarily should be unifying will be politicised and the main issue lost in the ensuing back and forth,” he said.

One user, @Ghost_writer__ said, “Obalende shooting is intentional. A reason a put security on the street and call a curfew so no protest holds on Saturday. Lmao same script everytime because why are those ones fighting now?”

Another user, @SodiqTade opined that “What is happening in Obalende right now is a direct indictment on Sanwoolu led administration and it justifies our claim that Lagos isn’t secured for the average Lagosians. The fear of thugs to rub you in daylight and fear of getting hit by stray bullets is now a thing in Lagos.”

NURTW people and “thugs” are said to be causing massive violence now in Obalende.

This is a well-orchestrated plan.
These people know exactly what they are doing.

Very soon, the Police will “advise” against Saturday protest. Govt will announce “curfew”.

The script is the same.

The clash at Obalende happening right in front of a Police station tells you what you need to know about how secure we are.

Then again, what’s the incentive for the members of the police force to place their lives on the line?

You can’t solve one without the other.

If you watch this video carefully, and know Obalende very well, you will realize that a police station is a few steps away from the fight.

Where are the police men?