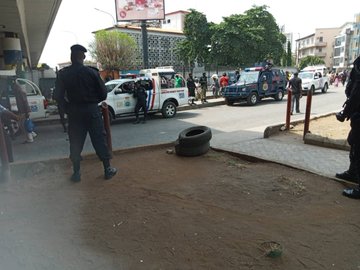 The Obalende area of Lagos State became a battleground on Thursday morning as rival factions of the National Union of Road Transport Workers clashed.

The area became unsafe for residents and passers-by as they could be seen running for safety in different viral videos uploaded on social media.

Although the cause of the clash that led to a gun battle is yet to be known, Nigerians have indicted the government as well as the security outfit for empowering and as well the lack of control, respectively, of the NURTW workers who are popularly regarded as ‘agberos’ – area boys.

As many people on Twitter advised those around the hot zone to stay safe, some users of the bird app have called out #DefendLagos supporters.

MORE READING!  'I’m the most honest and genuine person you’ll ever meet' – DJ Cuppy spills secrets about her person

Recall that the #DefendLagos supporters recently came out on Twitter to counter the #OccupyLekkiTollGate supporters who intend to stage a protest on Saturday, February 13th against the reopening of the Lekki Toll Gate following the approval to reopen the gate by Judicial Panel of Inquiry set up by the Lagos State government to investigate the October 2020 Lekki shooting incident.

“We will not cede our city to criminals and insurrectionists,” one of the #DefenLagos supporters said as they planned to stage a counter-protest.

This has led to calls on Twitter for #DefendLagos supporters to move into swift action against the NURTW rival factions disrupting the peace of Lagosian residing and those going about their daily duties at the Obalende area of the state.

“Defenders of Lagos! Arise and go and defend Obalende now. Don’t waste our time,” one Twitter user said, calling on the #DefenLagos supporters.

“If you were trending #DefendLagos & you’re not currently at Obalende challenging those thugs & protecting Lagos from them, then I’m here to tell you you’re a fraud,” says another Twitter user.

“Where are the Lion Guard Defenders of Lagos? Obalende is the location. #DefendLagos,” says another.

Another said, “You all in Lagos that keep quiet when your favourite politicians use thugs to win elections should know that one day those thugs will touch you when they have no jobs from politicians. We have a strong agbero economy in Lagos and remember, no one has the monopoly of violence.”

Meanwhile, the Lagos State Police Rapid Response Team has announced that normalcy has returned to the obalende area of the state.

Normalcy has returned to Obalende as police officers are stationed in its strategic points. pic.twitter.com/zhR2OSPmTq