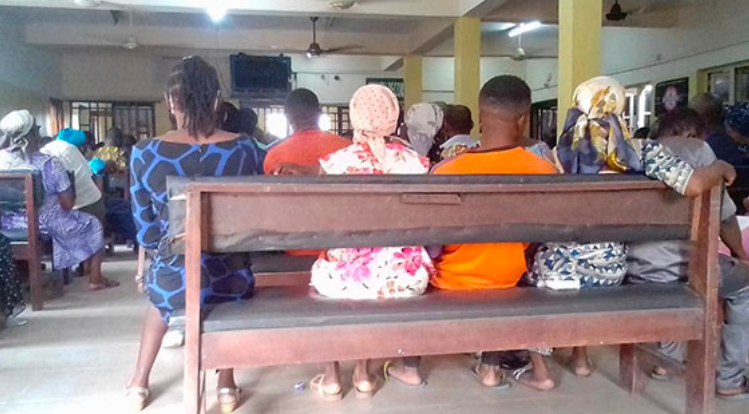 As the industrial action by the National Association of Resident Doctors entered it seventh day, reports say nurses at Federal Neuropsychiatric Hospital, Yaba are getting overwhelmed by the large turnout of patients.

Recall that NARD embarked on industrial on Thursday, April I, embarked on an indefinite strike to press home resident doctors’ 13-point demands.

A visit to the hospital on Tuesday by PUNCH HealthWise shows that patients were offered skeletal services, even as many of their relatives complained that no doctor was on ground to attend to them.

Our correspondent gathered that some of those who came in as emergencies were also not seen by doctors, while nurses who appeared to be overwhelmed by the large turnout of patients were in charge.

Though the hospital authorities said there were about 20 consultant psychiatrists on hand to attend to patients, some relatives of patients who spoke with our correspondent said that the impact was not being felt as the patients were only attended to by nurses.

Sharing his frustration with our correspondent, a relative of a new patient, Mr. Bourdillion Augustine, said, “I brought my nephew, Timothy Sesebo, from Abule-Egba to this hospital by 4AM as an emergency. When we came, one of the nurses told us that doctors were on strike and that we will not be able to see a doctor.

“The nurse only wrote some drugs and injections for me to go and buy for him. She told me to bring him back in two weeks’ time if I wanted him to see a doctor.

“This is the first time we would be visiting the hospital since 2012 that he started having mental health issues, yet, we are not able to see a doctor. I’m not happy at all.”

On why it took them over eight years to bring Timothy to the hospital, Mr. Augustine said, “We have been managing his condition the native way. We took him to herbalists and spiritual homes. But his recovery had been poor and unstable.”

Continuing, he said, “One of the herbalists told us that his mental health issue was not spiritual but as a result of the weed that he smokes. Last week, his condition grew worse, he became very violent and destructive. This morning, we had to rush him here, only to be told that doctors were on strike.”

Another patient’s relative, Ms Blessing Okafor, said his brother, Abuchi Okafor, was not able to see a doctor despite his condition.

“He has been behaving funny for a while now by talking to himself and destroying things in the house. But on Saturday, his condition became bad.

“So, we took him to the Federal Medical Centre, Ebute-Metta, from where he was referred to this hospital. Since we came to the emergency unit, no doctor has attended to him to at least ascertain what the problem is.

“Only the nurses are attending to patients. We are waiting for them. I hope it will get to our turn today because people are many here and the nurses are few. The nurses have told those insisting on seeing a doctor to come back in two weeks time,” Okafor narrated.

Responding to the situation in an interview with PUNCH HealthWise, President of the Association of Resident Doctors, FNPH Yaba, Dr. Aladejare Potard, said it will be difficult for the 23 consultant psychiatrists at the 535-bed health facility to manage the large number of patients that visit the hospital on a daily basis without the assistance of the 26 resident doctors.

“We complied with the strike directive by our national body. You will not find any resident doctor that is working. The people you will see are corps members, locum doctors, nurses and consultants.

“At a time like this, the quality of care reduces because the attention given to patients is limited. There is probably no room for patients to express themselves and register their complaints. Also, the review of patients on the wards is affected by the strike,” he said.

Reacting to patients’ complaints, Deputy Director of Administration in charge of Public Relations at the hospital, Mrs. Lydia Ajayi, said that the patients’ claims were untrue.

“I do not agree that those patients you are talking about are on emergency, though I have not been there to verify the situation.

“I know very that if it is an emergency situation, they will be attended to by the consultant psychiatrists there. We have two of them there.

“Also, I want to tell you that the nurses that work at the emergency unit are experienced and well versed in what they do,” she said.

Related Topics:Nurses at Yaba Psychiatric Hospital overwhelmed by patients
Up Next