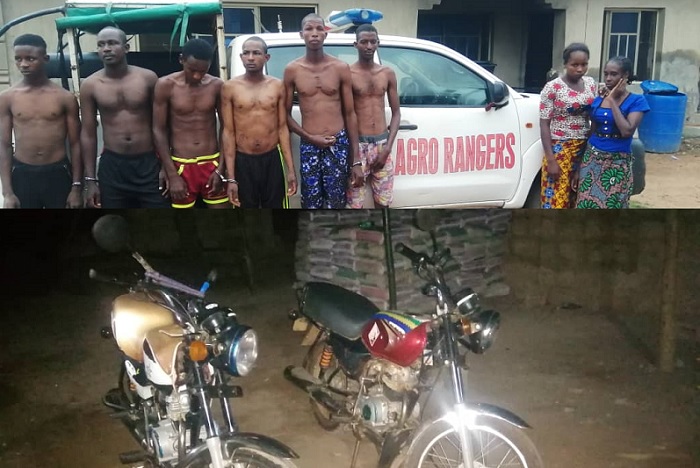 Twored Boxer Motorcycles marked BDJ 580 UL and EGB 628 UF, six cell phones and N32,510 cash were recovered from the suspects
The Agro Rangers Squad, of the Nigeria Security and Civil Defence Corps [NSCDC] has arrested eight criminals suspected to be terrorising residents in some communities of Oyo State.WuzupNigeria gathered that two red Boxer Motorcycles marked BDJ 580 UL and EGB 628 UF, six cell phones and N32,510 cash were recovered from the suspects.It was gathered that the criminals, who are suspected to be kidnappers, operated in Ado Awaye, Araromi Lcda, Okaka and Otu communities in Itesiwsju Local Government Area and Ilero in Iwa Local Council Development Authority of the state.
MORE READING!  BBNaija: Vee speaks on rift between her, Tolanibaj and Erica (Video)
The NSCDC said that one Alhaji Baani Abubakar, otherwise called Chief Jowuro, made a distress call in Oke-Ogun at around 11:15 pm on Thursday that suspected kidnappers were spotted at Bobajiroro Hotel, Oke Adeta, Iseyin.The state Commandant of the NSCDC, Iskilu Akinsanya, who disclosed this said that six male and two female suspects were arrested at the hotel.
MORE READING!  Billionaire’s son, Kiddwaya, meets CEO of Transcorp group
He added that in the course of an investigation, his men trailed one of the suspects named Umaru Lawal to a hideout.“The eight suspected kidnappers which consist of six males and two females were arrested at the Bobajiroro Hotel,” he said.” During cross-examination of the suspects, one of the trailed suspects to the scene of the arrest who was 25 years old, declared that the number used in tracking him belongs to his friend.
MORE READING!  Pastor Adeboye felicitates with Bishop Oyedepo on 66th birthday
“Further interrogation revealed that those numbers were stored on his phone with different codes such as 52,42,33, while the suspect later assisted the corps in apprehending the remaining seven suspects,” Akinsanya said.The commandant said that the suspects would be handed over to the Anti-Kidnapping Squad of the police in the state for further investigation and prosecution.
Related Topics:agro squadFeaturedkidnappersNSCDCOyo
Up Next

Police arrest immigration officer, three others with trailers of rustled cows in Katsina

Court remands Benue Lawmaker, one other in prison for alleged robbery, abduction