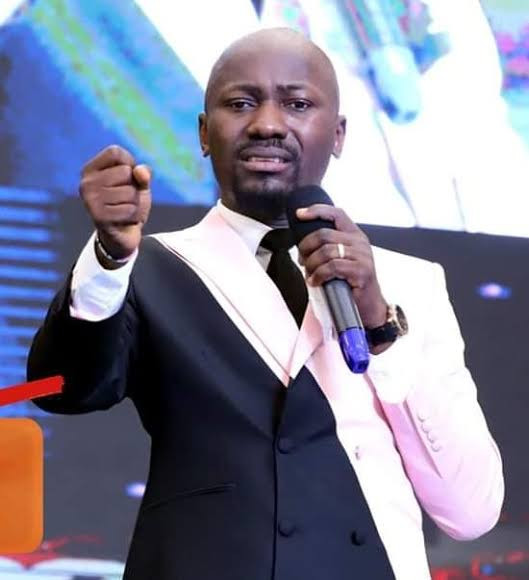 The General Overseer Omega Fire Ministries International Apostle Johnson Suleman has swore that he has no plan to encourage any of his family to take a jab of the AstraZeneca COVID-19 vaccine.

Suleman made the statement in a viral video on Wednesday.

The minister, however, noted that it has nothing to do with claims of conspiracy theory, mark of the beast or the antichrist but a “medical fault”.

The OFM overseer, who revealed that he has been praying over it for days because of its sensitivity, claimed that God showed him something is medically abnormal with the vaccine.

He therefore admonished Nigerians not to be deceived by President Muhammadu Buhari and Governors, who are taking the vaccines, wondering: “do you think it is the vaccines they are giving them they would give you?”

“Some people have come up with all kind of theories, I don’t know what they call conspiracy but I could know that it is theories and some say it’s the mark of the beast.

“Some say it’s the Antichrist but I’ve said to you before that, when the Antichrist will come, we will not be here. We would have been gone. I don’t say it is spiritual but I see something medical, that thing is not good and I’m hearing in some places now, they are making it compulsory.

“See people are watching online, they will misunderstand me. If you want to take it, take it but I’ll advise anybody who has consciousness not to take it, it’s not healthy.

“What I saw in it, I’ll not take it. Forget all those ones they are showing you one governor taking it. Oh, you think that thing they are putting in him, you think that’s what they are coming to put in you?

“Now I’m hearing that they said if you don’t have it you can’t travel, that’s nonsense. Whoever doesn’t want to take it, should not take it.

“Maintain all the protocols you can maintain. If you want to take it, take it. I’m not telling everybody not to but I’m telling every Omega child. Forget it I know they are going to come up with laws that you must take it.

“There are some jobs now, especially in the medical line, they said everybody must take it, some hospitals and some nurses but don’t take it.

“Listen to me, whatever I tell you take it to the bank, you will soon know. That’s how I gave prophecy here about Donald Trump not winning and people think I’m anti-Trump. I’m talking about something spiritual and they were being emotional.

“America, the kind of suffering they will suffer after one or two years, you will see it and it’s not the man, it’s the woman, that’s the president.

“The woman is the president not the man, you will soon understand. He only came to prepare a way for her, when it happen you will know.”