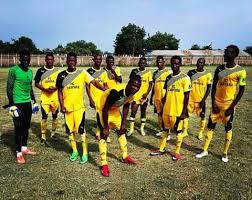 The Zamfara Utd Football Club has beaten Kebbi Utd FC by 2-0, to chalk up its second win on the trot, at the ongoing Nigerian National League (NNL), the News Agency of Nigeria (NAN) reports.

The match was played at the Sardauna Memorial Stadium, Gusau, under Covid-19 restrictions.

In a statement issued on Saturday in Gusau by the Media Assistant to the Zamfara Utd FC, Abubakar Almajir, said the match, which started at about 4:15 pm, ended around 6:05 pm on Friday, Feb. 19.

“Commending Zamfara Utd FC players, after the match, the Special Adviser to Gov. Bello Matawalle in the Directorate of Sports Development, Alhaji Ahmad Bagu expressed delight with the performance of the players and technical crew.

“Bagu appealed to them to maximise efforts ahead of up coming matches.

“The Zamfara FC players who scored goals during the encounter were Luiz Ntaji and Nasiru Na’ala”, the statement said.