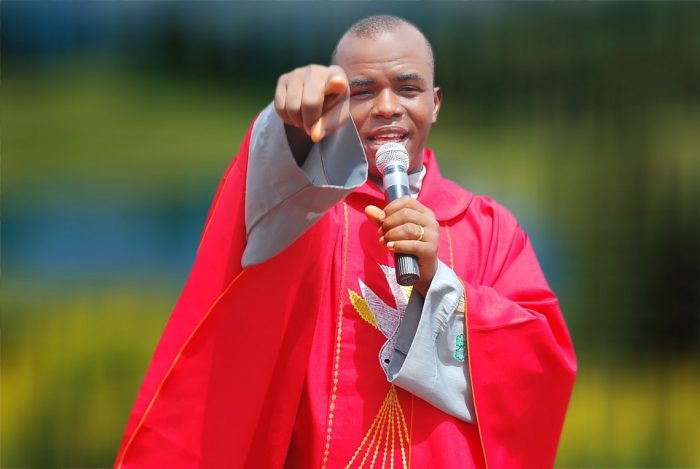 Founder of Adoration Ministry, Rev. Fr Ejike Mbaka, has thrown a subtle shade at the South Eastern governors over their alleged role in the predicament of detained leader of the Indigenous People of Biafra (IPOB), Nnamdi Kanu.

While condemning the alleged connivance between the governors and the Federal Government that culminated in the re-arrest and extradition of the self-acclaimed Biafra leader, Mbaka declared that nothing can stop the agitation of the masses.

According to the Nation, the fiery preacher made the statement during his Wednesday weekly ministration titled: ‘E no dey again.

Although Mbaka did not mention the name of any governor or directly call out Kanu in the message, it was clear to the congregation that he was making reference to the IPOB leader and the deep-seated silence of the South Eastern governors.

The cleric could not hide his disgust when he alluded that the governors lured one of their own into the hands of his oppressors.

“Don’t sell your sons and daughters because of political promise that you are not even sure will materialise tomorrow.

“Don’t sell your son because you are governors today! Live and let live.

“Leaders beware! Their (leaders’) stubbornness will collapse this country one day. If care is not taken, it will happen like an earthquake!

“Even if you arrest 100 people, it will not stop the agitation. If anything, it will worsen the situation,” he warned.

Mbaka also chided those celebrating the fugitive’s arrest, saying that it was only a matter of time before everyone, including religious leaders, would be at the receiving end of the present administration brutality.

“Many people are clapping for them now. But when the heat becomes unbearable when the sun riots, when heavens shake you will understand.

“When they killed Jesus Christ and put him in the prison-grave – Jesus’ prison was in the grave – they thought it was all over for Him, that the end had come.

“Whoever that you have in heart now that is in the prison, may the Lord be with that person. May the Lord show such persons mercy. May they receive favour; favour for my people.

“May the Lord show him favour, even from the prison warders that would be protecting him”.

Related Topics:agitationMbakaNnamdi Kanu
Up Next